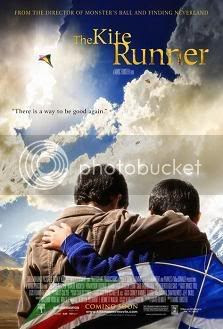 Any film worth its weight in celluloid can best be described as a representation of an idea, why and how that idea is expressed being left up to the particulars of the chosen story, genre, and every creative element apparent in the final product. This means of expression/sharing is culture in its most basic form, and among the primary reasons why I loathe (to say the least) the oft-repeated phrase "it's just a movie", a nugget typically employed with inconsistency among those who buy into its dismissive naivety, purporting silence amongst those who take the medium seriously (from Showgirls to Munich and back, oh my) only to be quickly forgotten when topical movies bubble to the surface of mainstream popularity. This lackadaisical approach to the effects of the medium is at the heart of why film like The Kite Runner are so dangerous, simplistic concoctions that pander to audiences (as opposed to truths), their guise of harmlessness masking naivety and ignorance. That last word is key, for Marc Forster's film—like Paul Haggis's Crash—is one of banal evil, unaware to its own offenses and infinitely worse off because of it.

One needn't read Khaled Hosseini's original novel of the same name to see how The Kite Runner homogenizes and flattens its material, doing to racial and social oppression in the Middle East what Michael Bay's Pearl Harbor did to American tragedy and vigilance at a turning point in history. That The Kite Runner strikes the occasional notes of genuine emotion speaks to the humanity inherent in its core premise, the trauma that undergoes two childhood friends of converging racial and economic backgrounds after one is subjected to a hate crime of inconceivable magnitude. Tears nearly flow as the educated Amir (Zekeria Ebrahimi) reads aloud the illiterate Hassan's (Ahmad Khan Mahmidzada) favorite story, but such is a fleeting moment of unembellished interaction that speaks volumes to the class differences that lie at the crux of the story. Enter hilariously CG-enhanced kite flying sequences reminiscent of the final aerial battle from The Matrix Revolutions and Alberto Iglesias's overbearingly "foreign" score (which plays like a Hallmark travel-abroad-from-your-living-room compilation), and this tale becomes one of cheap sentiment and skin-deep abstractions, reducing complex turmoil to what amounts to a few good guy/bad guy plot points, overly decorated clichés seemingly calculated for Western audience who need convincing to care about life outside their own borders (with no example worse than a PG-rated rape scene at kitschy as a Disneyland tea cup ride). The Kite Runner will no doubt warm the hearts of its intended audience (says Roger Ebert in predictable booster fashion, "How long has it been since you saw a movie that succeeds as pure story?" Uh, about a week?), but its nature is one of dubious flattery.