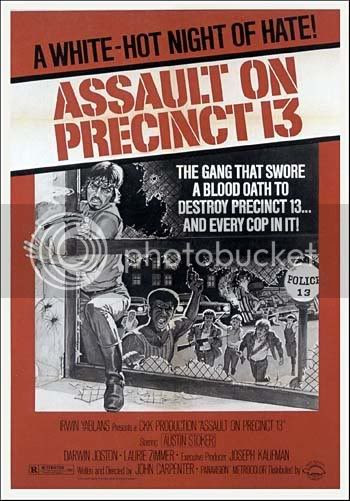 John Carpenter's mastery of hard-boiled genre tropes may be no more evident than in his 1976 masterwork Assault on Precinct 13, a neo-western bathed in urban decay and 70's racial tensions that packs - in 90 minutes, no less - more insight into life lessons and moral codes of honor (do unto others, etc.) than most filmmakers achieve in an entire career. Relying almost entirely on subtext of its classic action movie plot, Carpenter's film suggests cinematic poetry in its efficiency of language, with nary a shot of verbal exchanged wasted when it comes to the director's rigorous visual codes, delectably framed in the same way every line in a manifesto is agonized over prior to publication. His Los Angeles is as godforsaken and savage as that envisioned by Ridley Scott in Blade Runner, but its setting plays like the honest-to-god real thing, unlike the warped and caricatured cops and robbers playgrounds effectively satirized by the Grand Theft Auto video game series (itself and undervalued work of almost-brilliant satire).

Assault on Precinct 13 begins from above looking below, as a group of thugs (of varying races, quite importantly) navigate a hallway, guns in hand. Suddenly, the police appear and begin firing when the gang members begin to flee, ignoring orders to surrender their weapons. Next scene: a radio broadcast stresses the importance of tracking down a cache of missing weapons, the effects of which would be disastrous in the wrong hands. Ominously, M-16's and boxes of ammunition are seen in the background as additional gang members engage in a blood pact, foreshadowing what is later revealed to be a commitment to fight without fear (and without reason), to the death. Even before we meet our principle characters, Carpenter has established the uneasy, crumbling balance between the law and the rising anti-establishments. In the midst of anti-authoritarian attitudes, Carpenter seeks to cleanse one's lens of social justice, reminding us that cops aren't always crooked and sometimes the bad guys are in fact just that.

Ensuing plot developments further complicate and illuminate the issue. It's Ethan Bishop's (Austin Stoker) first day on the force, his hopes for a heroic task the first night out shot down when he's assigned to babysit the closing of Precinct 9 in Section 13 (the inconsistency with the title a potentially deliberate choice, reinforcing the film's utter lack of concern for petty and inconsequential details). Such is a unworthy job, but someone has to do it, and Carpenter effectively utilizes the location of the decrepit police station to signify the changing social order and evolution of justice. Bishop, a black man, meets cute with the secretaries and reveals his own decision (with the help of his father) to leave the gang-infested life of the ghetto at age 20, contrasting with the deliberate criminal actions of Napoleon Wilson, a white convict being transferred to death row who deliberately chose a life of crime (though not after being told as a child by a priest that he "had something to do with death"). When a fellow inmate falls ill during the transfer, their bus is forced to defer to the nearest jail house, where Bishop reluctantly agrees to house them while medical treatment can be obtained.

Converging with these characters is an L.A. everyman, noticeably distrustful of authority, who suffers a great loss to the mindless acts of violence of the newly armed Street Thunder gang. Successfully offing his daughter's killer, the man takes refuge in the nearby police station when he realizes the remainder of the gang's members are now after him. Located out of the way in a practically abandoned neighborhood, the occupants of the police station must fend off the waves of gang attacks, silenced gunfire riddling the station and, with the power deliberately taken out, no way of contacting anyone for help. A passive secretary suggests giving the gang members their newfound refugee, and is later caught in gunfire, the inherent result of not fighting back in protection of those unable to do the same.

Carpenter's social commentary juices flow most strongly when he's deconstructing the genre's racial and gender roles, the Street Thunder gang being the great evil that forces our protagonists to join as one: black cop, white cop, black convict, white convict. Fate interplays, such as when death row convict Wells (Tony Burton) complains that he's always had bad luck, not moments before a bitter death. American society remains flawed in Carpenter's eye but the strive for justice is a victory all its own, the protagonists surviving only because of their ability to set aside their purported identities (male, female, etc.), remaining individuals as they unite as equals. Carpenter's almost mathematically structured framework itself defies any sense of bias, his characters on equal footing whether they remain in defiance of one another, or, in a climactic and revealing shot, stand side by side as a single force.

Because Carpenter's observations render Assault on Precinct 13 as one of the most transcendent of all action films, it's almost easy to glance over the razor sharp narrative precision and the efficiency of its lean, mean setpieces; absorbing the space of their locations, the camera itself feels like an occupant of the police station fortress, bullets ricocheting while gangsters attack not unlike the zombies from Night of the Living Dead. Carpenter is more subtle than Romero in his evocation of social conflict but his insight is as profound as that film's Vietnam-infused anger, the hopefully optimistic ying to Romero's learnedly pessimistic yang. Points for humor, however, go to Carpenter, who achieves—through the great performance that is Tony Burton's—what may be the most hilariously titled escape plan in movie history. Although there may be no greater isolated element than Carpenter's own soulful synth score, Assault on Precint 13's powerful exercise in democracy—which appropriately ends with our two male protagonists marching together up a flight of steps—is nothing short of one for the ages.