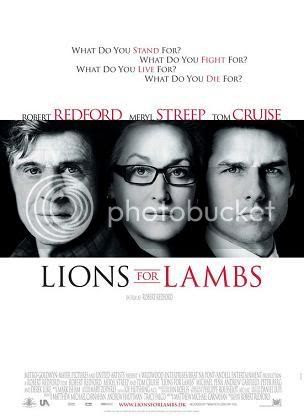 Are we so desensitized by the state of worldly affairs -- indeed, even the state of worldly affair-driven cinema -- that we've become unable to distinguish the illuminating and honest from purely titillating distractions? I can't speak for my fellows (whom I certainly mean not to judge), but I'll readily admit to having went into the almost universally decried Lions for Lambs all but ready to, as some of us say, rip it a new one, only to be quickly disarmed, ultimately finding myself in the curious position of agreeing with Armond White. The film is talky, preachy, and obvious, but it's also honest, to-the-point, frank, and anything but simplistic, avoiding not only the disingenuously visceral point making of the likes of United 93, but also (and more importantly) the distancing apathy of so many films that it deliberately seeks to counter. Its material is anything but fresh but its approach successfully validates the material, recalling Hal Phillip Walker's argument that we are all, like it or not, heavily involved in politics.

The film proper runs under 90 minutes, effectively encapsulating its simple truths without excessive, plot-based distractions, although such precision hasn't kept its emphasis on dialogue (read: ideas) from becoming a major point to berate (as if too little, a la 2001, or too much, is inherently bad; are our cinematic audiences now the equivalent of Goldilocks?). Redford stages his film as the verbal equivalent to a D.W. Griffith montage, relying not only on effective close-up/wide shot cuts to convey inner character workings, but pure verbal melody as an incisive razor into our current political moment. His characters -- an aging college professor (Redford), a young and voracious Republican Senator (Tom Cruise), an experienced liberal journalist (Meryl Streep), a disinterested young student (Andrew Garfield), and two foot soldiers (Peter Berg and Derek Luke) -- are decidedly and deliberately archetypal, channeling concepts and issues larger than themselves even as they remain rooted in earthly character.

The film's intentions are apparent in the bookending device of Andrew Garfield's politically disinterested Todd Hayes watching a television, the opening shot juxtaposing his passive stare with that (purported) of the audience before cutting to the image of a television screen, an image that not only one ups all of Michael Haneke's would-be commentary Funny Games, but one that also reinforces the viewer with a sense of responsibility not only as regards what they do, but what they watch. Though Lions for Lambs occasionally smacks of an elder generation attempting to convey a younger, hipper attitude (a singularly wince-inducing moment involves a lyric from The Who), most evident in the proceedings is Redford's learned means of employing celebrity power as means of public service, here avoiding condescension by not thrusting an individual viewpoint down our throats (if the film were to be given a label, moderately liberal seems appropriate) but by politely clamoring for our attention when it's needed most. While still a far cry from Steven Spielberg's prodigious 2005 output, Lions for Lambs reminds us of what Hollywood does best, when it wants to.