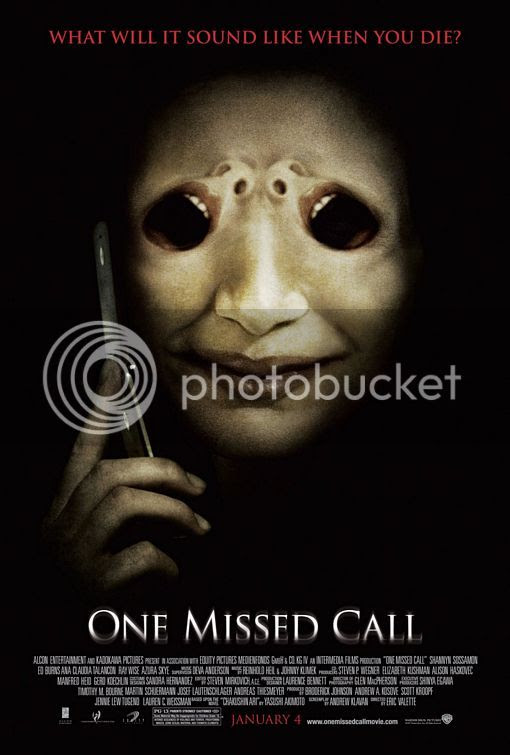 The laziest kind of horror film, One Missed Call culls up idiotic and redundant haunted house imagery in what amounts to little more than a feature-length execution of a wanting sales pitch. A mysterious ring tone precedes the voice mail recording of the recipient's future death (complete with exact date and time), while the numbers listed in each victim's phone provide the means by which the traveling curse chooses its next target. So goes this Ringu-esque cycle of violence, itself a remake from another technology-obsessed J-horror feature. Films like Kairo speak implicit volumes about our growing and disturbing relationships to technology -- not to mention our similarly turbulent and troublesome ways of understanding death -- but it can be generally understood that the majority of their English-language counterparts are less than concerned with these themes, essentially disposing of the genre's metaphorical strengths in favor of cheap manipulations, fleeting and idle shocks rather than invested scares. Turning the camera from side to side more or less encapsulates director Eric Valette's definition of eerie, while the repeated, hallucinatory images of distorted faces, blurred figures and giant centipedes amount to nothing more than the one-two-three pieces of a mystery derivative of one of the subplots from The Sixth Sense. Constantly setting up plainly false climaxes so as to purportedly pull the rug out from beneath the audience's feet, One Missed Call's offenses run deeper than mundane storytelling because of its deliberately vacant subtext, kept clean as a whistle as if anything even remotely ambiguous might reveal the ineptitude permeating this broken record scenario. The ultimate revelation as to the source of the mysterious deaths -- here, a case of child abuse gone much too far -- deliberately keeps its distance from anything remotely thematic in nature, confirming the film's total lack of concern for motivation as it lavishes obnoxious attention on each would-be terrifying Final Destination-like countdown. Never mind that the makers fail to even recognize the central paradox at hand (like the infinitely better Minority Report and its pre-cogs, the ominous messages here are a self-fulfilling prophecy); One Missed Call shovels creative bankruptcy in the name of paranoia exploitation, a market-spawned Happy Meal trinket lacking both skill and wisdom. Appropriate then, that a film in which characters' lives are so easily tossed off would be equally inconsiderate to our own.

An average transfer for a visually below-average film: effects stand out like a sore thumb in this digital forest (although I doubt it looked any different in theaters), while blacks and general detail work remain just good enough throughout. Sound is clear and, therefore, achieves the most shrill effect possible. Zero in the extras department, although it's somehow fitting for a film this hodgepodge to arrive in stores on a bare bones disc -- it's all that much closer to being nothing at all.