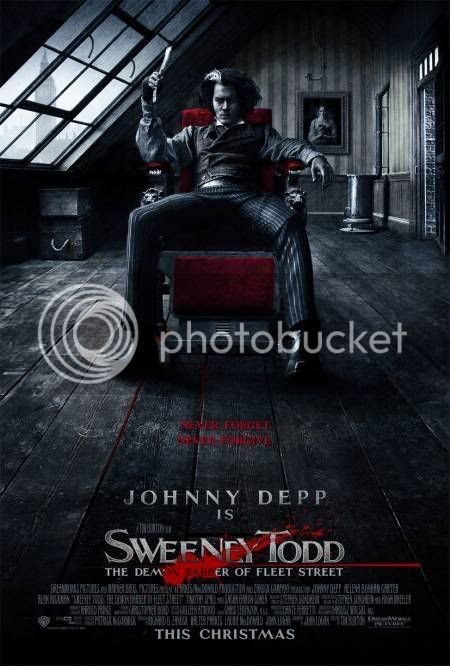 With the near-simultaneous release of both Charlie and the Chocolate Factory and Corpse Bride, 2005 was a financial banner year for Tim Burton even as the man's artistry sagged in the middle. Seemingly emerging from this awkward post-Big Fish transition, Sweeney Todd: The Demon Barber of Fleet Street finds the maestro of macabre on sure footing once again, deftly reworking the 1979 Stephen Sondheim musical into a recognizably cinematic form, echoing German expressionism (perhaps more strongly than any other film in his canon) by embracing its every artificiality like a full-throttle stage performance. In telling the story of Benjamin Barker—an innocent man returning home from a wrongly (and purposefully) imposed fifteen year prison sentence, robbed of his family and bent on revenge—Burton's unmistakable presence is felt everywhere, from the broad, cheeky nihilism to every exquisitely framed shot. Painterly digital mattes establish the moral rot of Sweeney's London underbelly and lush, striking primary colors punctuate the darkened scenery like ecstatic gushes of emotion, and though Burton's film lives and dies on its ravishing eye candy, it fails to reach the same powerful depths of emotion as, say, the director's underrated Batman Returns, in that it retains a smidgen of sly acknowledgment, as though Captain Jack Sparrow were on board to remind us that it's all still a game in the end. A gorgeous spectacle of bloodletting, no doubt (raindrops fall like bloody tears and jugulars gush deep crimson paint more than blood), Burton's reinforced, slightly comical distance from the material prevents it from reaching a greater transcendence, reducing what could have been an outrightly operatic tragedy into pure angst, feeling but also fleeting: one remembers the exquisite Gothic imagery but, though it all, Todd's soul never feels bared. Having never seen the source material, I cannot comment more substantially on the specifics of this adaptation: Jim Emerson breathlessly evaluates Burton's efforts and their purported failure here, and though such is a view I might share upon becoming familiar with the musical itself, Sweeney Todd would seem, quite notwithstanding, a significant step forward from the dreadfully phoned-in storytelling and songwriting of the Hot Topic-pandering Corpse Bride. If that glint of self-awareness is Sweeney Todd's damnable limitation, then at least succumb to its focused use of scenery, in what amounts to the most accomplished almost-remake of The Cabinet of Dr. Caligari since the passing of the silent era.