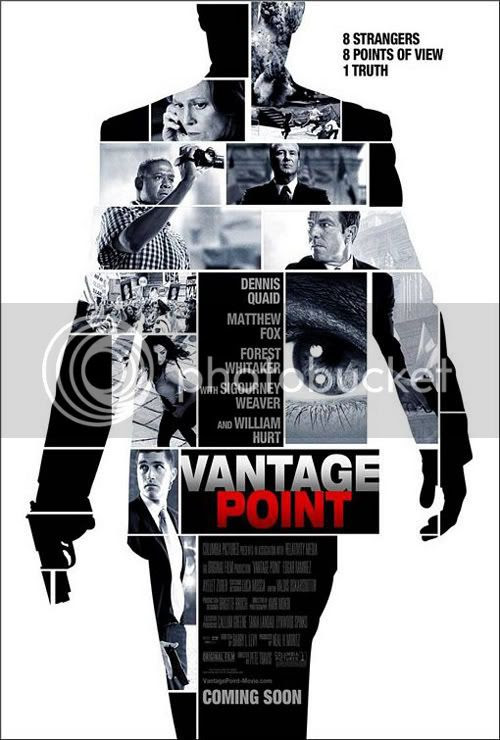 A crowded highway, panic abound. The President has been shot! A young Spanish girl seeks her mother fearfully, uncautious of the danger as she wanders into the road. A van approaches at high speed, coming right towards her! Will they break in time!? The frame rate slows and the screen fades to white as the child screams, in shrill accent, "Ma-ma!" Now, the film retreats for the umpteenth time, flashing through previously glimpsed images as if on rewind, so as to show us this overly calculated series of events from yet another character's viewpoint. If this moment alone isn't the most shrill concoction to yet come out of 21st Century cinema, then keep me steered clear of any Ron Howard or Paul Haggis films yet on my blind spots list. Condensing the worst elements from both nighttime television programming (from shows like 24 to similarly rank stuff like CSI) and Greengrassian neo-realism into a trashy game of cat-and-mouse between the filmmakers and audience, Vantage Point aims to thrill with what amounts to a disingenuous and perpetual dick tease devoid of both stamina and payoff, trading in bland, phony archetypes that feign humanity while the film attempts ceaselessly, almost impressively, but ultimately horridly, to suggest that something of excitement or importance is happening during any one of its mentally numbing 90 minutes (needlessly busy editing schematics and overwrought, pummeling musical scores be damned). When the president is assassinated at an international political convention, chaos ensues and various characters -- reporters, cops, potential terrorists, secret servicemen, officials, and civilians -- each hold a piece to the puzzle. Except that there is no puzzle, only patchy storytelling, and from the unimaginatively literal implementation of narrative fluctuations to the film's inconsistent means of doling out information -- a phony attempt at manipulation that better serves to expose the film's contempt for viewers than it does hide the complete lack of otherwise purported sophistication -- Vantage Point proves so idiotic and paper-thin that it makes the canonized bullshit of The Usual Suspects look almost profound by comparison. More substantive than the endless running, shouting, double-crossing and identity confusion to be found in this debacle is, in my mind, the sad fact that even so many talented and well-cast performers couldn't raise this above its nearly bottom-of-the-barrel status. For movies like Vantage Point, life is too short.