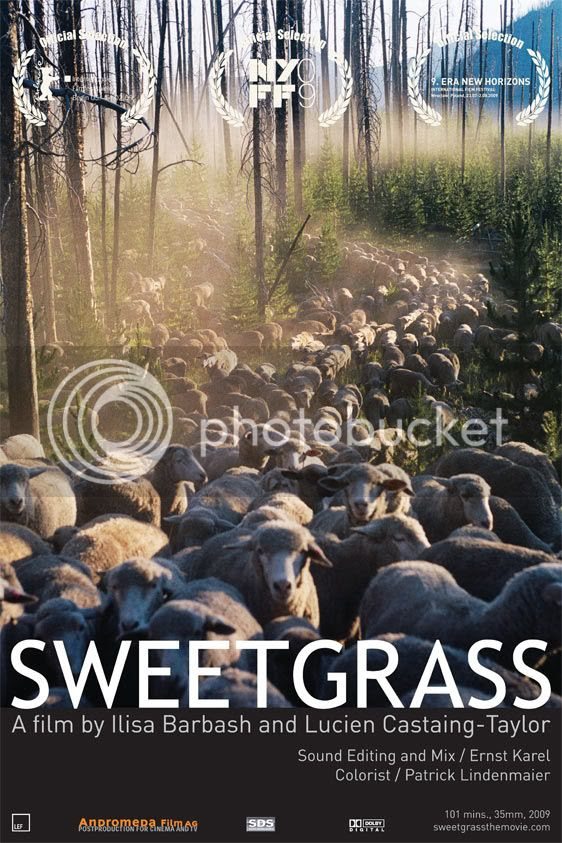 A borderline great film for the bulk of its length, Sweetgrass tragically falters for one very awkward portion that begins just after mid-point. It's sad how easy it is to fall from creative rapture, but let's forget that hurdle for now, as it can be addressed later. In a way flawless, Sweetgrass (named after one of the counties in which it was shot) suggests the opening chapter of 2001 by way of Au hasard Balthazar, watching with a dramatically-attuned documentary eye the final sheep herding through the Beartooth mountains of Montana in 2003. An opening shot in which a feeding sheep seemingly breaks the fourth wall (or does it?) is more alien than a combined half of Avatar, and with this movie we are forced to see the animals not as a product, but also, and firstly, as living creatures.
Modest in both its general premise and formal audaciousness, Sweetgrass's pleasures derive primarily from the rarely not breathtaking imagery abound in the Montana landscape, as well as a cinematic flair achieved via carefully selected off-the-cuff viewing angles. We see the chores, the feeding and herding methods, the daily routines, but the tendency to linger on the margins is one more revealing in whole than in part, documenting not just the processes but the larger behaviors on display. As both individuals and groups, the human and sheep are seen in a Godlike larger context (quite literally in a latter-end highlight) in which function, capabilities, and overwhelming limitations are seen with a nearly scientific clarity.

Where Sweetgrass falters, then, is in its inclusion of the humans, the cowboys and cowgirls driving the herd day in and out. At first caught only on the periphery of the action, the workers eventually cease to be observed subjects and begin, disastrously, monologuing to each other and to the camera like deer caught in the headlights of an impromptu Morgan Spurlock interrogation. The movie magic is killed, suffice to say, when this level quasi-direct interaction is introduced into what was otherwise a beautifully orchestrated web of love, death, and survival instincts, the basic components of life in this stripped-down vision.

Overall, this point of focus is a relatively minor one, but like falling into a gopher hole whilst running and breaking something in the process, it's a major misstep and an experience that takes time to recover from. The camera needs to be far off and out of the way to tell this story, and we should be thankful that the filmmakers (Ilisa Barbash and Lucien Castaing-Taylor are the uncredited directors) knew this for what feels like approximately 85% of the time.

A film of broad themes and big questions, Sweetgrass is largely calm and tonally assured tone poem that manages to nevertheless be populated by a number of nearly self-contained high points, increases and decreases in mood that suggest – and often parallel – natural shifts in the environment, implying a Herzogian understanding of the Earth itself as a single organism populated by countless smaller lifeforms. Two singularly great sequences come to mind here, the rest less easy to describe in words and better enjoyed onscreen for it. The first is the feeding drive, shout out the rear of the vehicle, which turns into a jaw-droppingly epic foreshadowing of the much-seen fact that you really do need a whole mountain to move these creatures on (or, at the least, shut down traffic on main street). The second is the aforementioned literal Gods-eye-view shot, coming during a point in which a cowboy, unprompted by the filmmakers (they must know they're being shot so “candid” doesn't quite apply), quite literally loses it at a moment of extreme disparity. Both here and in whole, Sweetgrass succeeds in the difficult-but-necessary task of examining small things to find great ones.