In which I take inspiration from RWK and attempt to give voice to more of these thoughts. 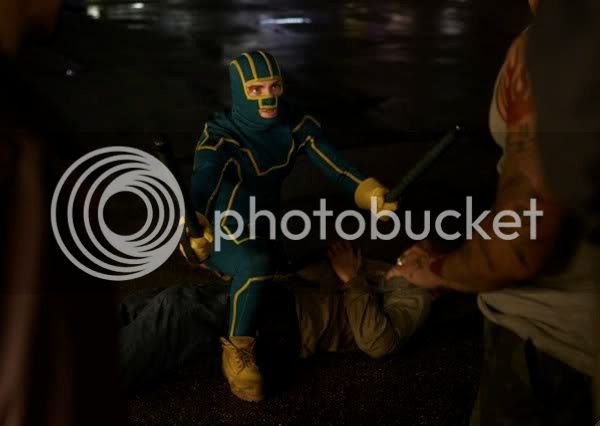 Kick-Ass (Matthew Vaughn, 2010) Like a runner lacking both legs and prosthetic replacements, Kick-Ass fails for two reasons, and is an equally unfunny sight. With both lack of focus and lack of thesis, this comic book inspired bit of tomfoolery at once doesn't know what it's saying and yet refuses to shut the hell up during what amounts to a genre dress-up play date from hell. A conceivably cool riff on Spider-Man's tale of empowered adolescence scatters its potential here on dead zone teenage sex comedy stuff and ironic, thoughtless violence. It's energy sans release. The movie invites parallels to “Watchmen”, so the comparison seems fair, even if Moore's magnum opus squashes it like a bug. Whereas that novel's escapades gained meaning and substance through that story's fully realized alternative world (to say nothing of rich characterization), Kick-Ass is pure good guy/bad guy cartoon simplicity, a watered-down setting in which its intended subversions are rendered moot. Nick Cage's Adam West antics should have been indulged more, while the prepubescent Hit Girl's sexual lingo is mere posturing, scarcely provocative, a iceberg cap without the foreboding mass hovering beneath. My man Fernando said it first, but the jab is worth repeating so pick your alternative title of choice: Half-Ass, Slow-Ass, Dumb-Ass... [C-]

***
Dear John (Lasse Hallström, 2010) Whether it's the wannabe Home Alone inanity of Getting Even With Dad or the Hallmark romance of Dear John, it would appear that movies can't invoke coin collecting in any fashion without making me smile. Past hobby biases notwithstanding (shit gets expensive...), this latest film based on the work of Nicholas Sparks (nevermind, I forgot about The Last Song) isn't so much offensive as it is relatively lifeless, a technically competent (if only just), decently acted bit of straight-faced cheese unfortunately based on a template wanting for genuine passion. Props for a mainstream movie going full-force with a relatively unconventional love story – concerning love's resistance to time, war, disease, distance, and more of life's heavy blows, it's more Scenes from a Marriage than Dirty Dancing. If you've seen both of those films, you're less likely to enjoy this one than if you've only seen the latter. [C+]

***
Valentine's Day (Garry Marshall, 2010) With an interlinked plot to make Paul Haggis's Crash look like a virtuous embodiment of subtlety by comparison (read: I really dislike 2005's “best picture”), Valentine's Day is slick and watchable enough to make one occasionally forget just how stupid the whole enterprise is. From Queen Latifah's boringly racist phone sex banter (movies of this sort are so boring these days that Blazing Saddles is on the verge of being outright revolutionary again) to Jennifer Garner's faux waitress performance to what may be the most thanklessly gullible wife in screen history, this rom-com-dram-zzz flick barely musters a single genuine laugh to bolster its otherwise routine “all you need is love” proceedings with a bit of memorable flavor. That a third-act bit of sexual subversion aims to qualify as such seems to speak more to the regression of our culture than the nature of the flick, but whatever, it's lame either way. If it isn't terrible, it's certainly forgettable. I imagine it might make good mental comfort food for the occasional, most likely female broken heart. Plus, with this cast, I'm sure about half of Hollywood got a paycheck out of it. [C-]

***
Remember Me (Allen Coulter, 2010) Sometimes the worst filmmaking choices are those in which the good intentions can still be felt. Take Remember Me, a brooding chunk of Gen Y malcontent gone for soap opera legitimacy. An opening act of violence sets the standard for a necessarily awkward witness to humanity's capacity for inhumanity, but it's a bar this politically conscious tale altogether fails to rise to in subsequent efforts, and them some. Two young adults, a boy and girl, fall in love amidst their raging against their parental machines in modern Brooklyn. Without spilling details, suffice to say that, in what is at best a misguided attempt to respect violence by averting it visually, Will Fetter's script takes some godawful missteps in its final pages in rendering the events in the cocktease style of a trashy thriller. That lump of coal notwithstanding, the framing and lighting are notably precise, if perhaps over-thought, the acting capable if less than truly inspired. I'd probably dislike it more if I lived in New York. [C]