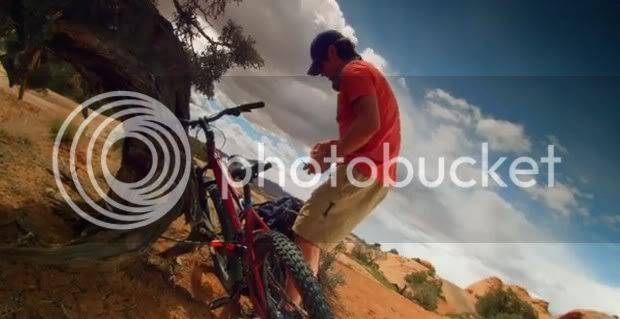 For all intents and purposes, Danny Boyle perfected his distinctively flamboyant music video-ish mode of filmmaking with the infectious and masterfully crowd-pleasing -- if somewhat slight -- Slumdog Millionaire, so it is perhaps inevitable that the similarly show-offy 127 Hours feels a bit redundant. Frequently utilizing split-screen panoramas and editorial effects that display everything from otherwise unrelated mood-setting imagery to Hulk-like multiple angles of the same event, Boyle aims (and, I would argue, mostly succeeds) to turn the infamous experiences of Aron Ralston (a recreational hiker who, in 2003, while alone in the proverbial middle of nowhere, inadvertently dislodged a large boulder and fell with it down a canyon shaft, his right arm becoming pinned between them, utterly immobile; after the titular time span, he freed himself by cutting off his arm with a dulled pocket knife) into an existential riff on determination, self-examination, and the sheer will to survive. Boyle's impulsive creative choices often lash out with seemingly little rhyme or reason, and his hyperactive editorial dashes tend to work best when they're emulating the thought processes of the main character (at one point literally, in a tongue-and-cheek talk show sequence), but they also develop collectively, not unlike the satisfying rumbles of an intense storm.

Alas, Boyle's awareness of his chosen style's limitations isn't among his present strengths, and one wishes that he'd handed the spotlight over to the almost one-man-show that is James Franco (he's as good to this film as Tom Hanks was to the similar, superior Cast Away) about twice as much as he actually did. It's not just that Boyle's flair wears itself out a bit as it goes on (rather than building to a crescendo, it just kind of fizzles out) -- it's that Franco is also just that good. As the loner Ralston, he doesn't just hide from people (implied and stated antisocialism abounds), but himself; he gradually becomes naked to himself, and we watch the unraveling with empathy. By the time he takes to the foretold limb hacking, the character seems stripped away to prehistoric carnality. As a warning to those put off by the apparent levels of violence: This squirmy viewer (icky body stuff bothers me, even though I love The Fly and even enjoy stuff like The Human Centipede, disturb me though they do) was able to get through the eventual mutilation with relative ease, so those deterred by intense levels of drawn-out violence can be at east. Then again, once you've seen Irreversible (twice), you can sit through just about anything. Now that I've gotten way off track, back to 127 Hours: It's a good movie, nothing great, but certainly worth a watch. I'm out.