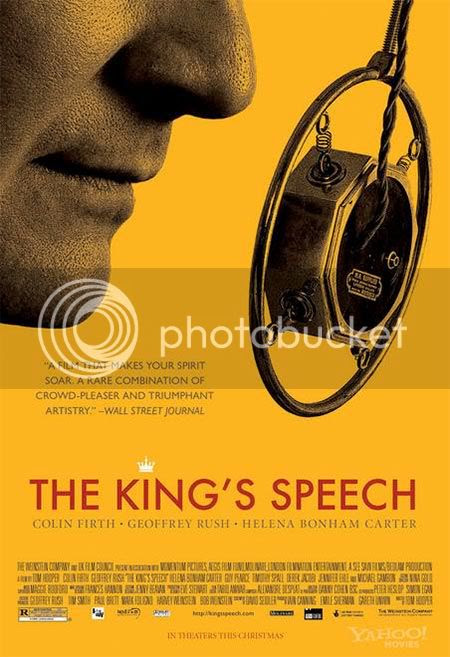 The King's Speech isn't the worst of the recent films to receive a gluttony of Academy Award nominations, but it is quite likely the most boring. There are films that win Oscars and there are films that are made with the intent to win Oscars, and sometimes those two overlap, but for the time being (nominees were just announced this morning) Tom Hooper's film is most definitely in the latter category. As dolled up and self-consciously serious as to count as something of an epitome of the glamour-hungry Weinstein Company's distinctive output, this dramatization of Prince Albert's (later King George VI's) journey to overcoming his speech impediment would like to think of itself as a moving, soulful character study, but such are the clothes of the naked emperor. In actuality, this high-minded exercise -- pretty looking and paper-thin -- utilizes the same template as any number of crowd-pleasing biopics, but whereas a film like Walk the Line embraces the simplifying nature of historical caricature (and Hollywood-typical manipulation), The King's Speech foolishly tries to pass off connect-the-dots psychology as profundity and sitcom mechanics as high art.

It speaks to the strength of Colin Firth's lead performance, then (as well as his shared chemistry with Geoffrey Rush, who portrays the speech expert who tries to cure the King), that the film almost gets away with it. Alas, personality has been washed from the cloth of The King's Speech with a heavy starch, and save for a few humorous sequences concerning Bertie's (as his family and friends refer to him) diction lessons, the effect is not unlike being straightjacketed for tea. A scantly-used Rorschach device typifies the wasted potential here; instead of a legitimate psychological inquiry, we're given a lavish movie of the week with lip service, and for every idiosyncrasy there are a half dozen lame concessions to sutured, unimaginative screenwriting -- it isn't long before the film feels thoroughly "safe" and insignificant. Emotional heft is traded in for tidy resolutions and pat history lessons (Hitler, the ultimate challenge of his kingship, is presented as a daunting Great Speaker and then promptly forgotten), and they all lived happily ever after. Ultimately worth watching for Firth, who finds nuance amidst what might otherwise be cartoon slickness, Helena Bonham Carter, who puts on a great fashion show as Bertie's wife, the Duchess of York, and Rush for his particular refusal to devolve into complete two-dimensionality, but only just. The pleasures are minimal, but at least the pain is, too.