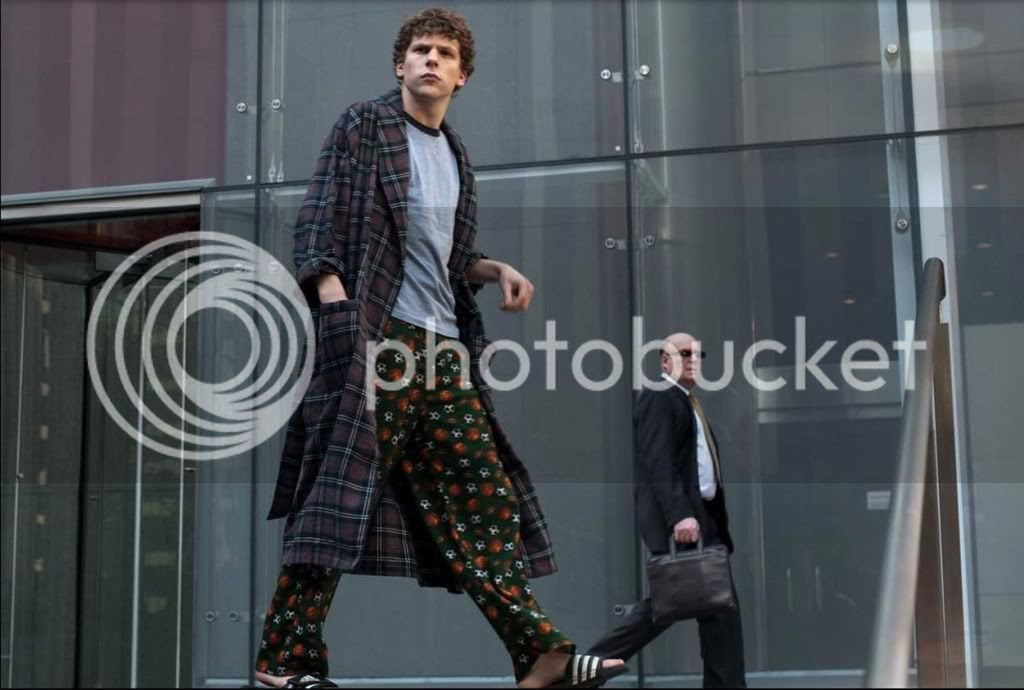 As I've already named it my personal #1 movie of 2010, I'll go ahead and assume that my affection for The Social Network is generally understood. Like GoodFellas, Pulp Fiction and David Fincher's own Fight Club, The Social Network strikes me as being as breathlessly composed as almost any work of the cinema and is equally infectious, like a great pop song. Fincher's kino eye, screenwriter Aaron Sorkin's ear for wittily self-conscious dialogue (the kind that people actually use, thanks most likely mostly to the long-term effects of the movies themselves) and Trent Reznor and Atticus Ross's addictive electronic score make for something of a perfect storm. Similarly consistent praise is due to the cast; Andrew Garfield is a personal favorite, but the lot are not unlike the perfectly oiled cogs to a massive, beautiful, funky machine.

For a movie so popular amongst both audiences and critics, the level of discourse surrounding has nevertheless struck me as surprisingly minimal, which is to say, both the praise and the dissent have struck me as almost equally weak in their articulation (such lack of discussion has been a particular buzzkill to how I typically enjoy these things). Early hype labeling the film an heir to Citizen Kane was both blessing and curse; as a friend aptly noted, the structure of the film acutely parallels that of Orson Welles' oft-named G.O.A.T. masterpiece, possibly more so than any non-parody of that film has ever managed, but such lofty praise can easily backfire under even the most conducive circumstances. (I'm speaking of critical hype, for the record, not Fincher's own tongue-in-cheek declaration that his film would be the Kane of John Hughes movies, a title I'd think appropriately bestowed on Adventureland, which, coincidentally, shares the same lead.)

When concerning a social trend that has thus far included close to 1/10th of the world's population (over 500 million have joined Facebook's network as of 2010), it's hard not to brush with the topics that guide the very essence of modern life, and part of The Social Network's appeal surely lies in the fact that it feels so very current -- a self-aware time capsule. But the film only incidentally examines the nature of this digital tsunami (Sorkin is allegedly computer illiterate; as the cute final scene demonstrates, however, he certainly grasps what Facebook can and does mean to millions of people) as it carries on with its primary task of scrutinizing the (interpreted, not real) character of Mark Zuckerberg (Jessie Eisenberg), the gifted programmer who launched the site in 2003 and is represented here by what are the likely questionable depositions following court action taken against him.

Early indicators set The Social Network aside from absolute factuality, and we're spared that most dubious of screen captions, "based on a true story." As is typical for movies based on real happenings, details have been changed aplenty, and as the adage goes, never let the facts get in the way (of a good story). To these eyes, The Social Network makes no claims to historical truth, and in doing so probably gets to the core of the material's truths all the better. I've not read Ben Mezrick's The Accidental Billionaires, on which Sorkin's screenplay is based, but as usual, I'm comfortable with whatever diverges have taken place so long as they remain in service of the film –- not some sloven adherence to trite details.

In collapsing the events of many years into a single streamlined narrative, Sorkin's screenplay is almost certainly deliberately indebted to Kane, a quality that wordlessly speaks to Zuckerberg's own inflated ego. As presented here, Zuckerberg's conception of Facebook followed his being courted to develop a similarly conceived web site meant to offer exclusive dating opportunities to Harvard students; after Facebook launched, Zuckerberg's would-be business partners took legal action, followed by former Facebook CFO Eduardo Saverin (Andrew Garfield), who was pushed out of his stock ownership in the company in an apparent revenge stunt by Zuckerberg. As the early stages of Facebook's creation are recounted via two different court hearings in overlapping (and seamlessly logical) fashion, we see Zuckerberg squirming his way through the proceedings, dodging questions, lying methodically, defying the laws of intellectual property and showing a general contempt for the legal system. His creation being certainly his own in the majority, the film doesn't slander his character for bad business -- just bad friendship.

It speaks to the sublime ambiguity of the film that what little diversity of opinion exists on it is largely of a directly conflicting nature (key example: those who think the film blesses Zuckerberg's questionable actions versus those who think it rakes him over the coals for them entirely); as someone points out at a key moment in the film, "You're not an asshole, Mark, you're just trying so hard to be" (the term is only used three times in the film, the first two coming from those who were closest to Mark, now pushed away). Longtime indie favorite Eisenberg (The Squid and the Whale, Zombieland) lends Zuckerberg what feels like a natural likability buried within a deeply insecure nature, but he doesn't warm up the character in audience-friendly terms (in other words, he lets you decide).

The machine gun dialogue of the opening scene sets the tone for both the character and the film, and speaking personally, I've been exactly that kind of thick-headed guy (in a crowded restaurant, albeit minus the educational condescension and assumptive judgment about “the door guy”), and I appreciate the hell out of any film that can be honest about that kind of character without relegating the perpetrator to the status of sheer dickhead. As a representation of this moment in history, we surely cannot be the final judge on the film's effectiveness (only hindsight will allow such), but as a touching look at friendship falling outs, its personal meaning to me remains unrivaled.