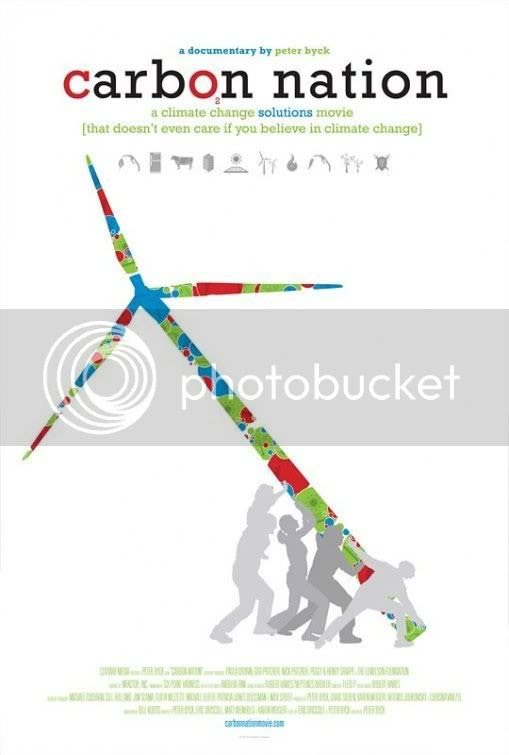 There's really no honest way for me to attempt a fully "objective" review of Carbon Nation, what with environmental conservation being one of my long time pet passions. In fact, despite anything in the way of aesthetic shortcomings (the movie surely isn't art, and nor does it try to be), what is perhaps most impressive about this nifty doc isn't how chock full of information it is (even if you're up on climate change and pollution, it's a great refresher course), but the imparted feeling of common empowerment. Having recently watched it, I feel guilty, and not because of my typically Woody Allen-esque liberal white guilt, but because I know I could be doing more than I already am, and with little effort.

Make no mistake: since the dawn of the industrial revolution, the rate at which we've been burning through our fossil fuels should be more than enough to give pause to every worldly cognizant man, woman, and child. Not only are we (in this review, "we" refers to the larger western civilization this American resides in) approaching a point of diminishing resources without sufficiently dependable alternatives (how soon is soon enough to act responsibly?; if oil deprivation hits us unprepared, the survivors might end up living through The Road Warrior), but we're also seriously disrupting the tenuous natural environment we depend on to survive. It doesn't matter that cancers abound from our indulgent and wasteful technologies and lifestyle choices; caught up in the cycles of a capitalistic society, many of those who don't already oppose a less naturally exploitative lifestyle (what better way to feed lies to the masses than to wrap them in a national symbol) are simply too apathetic to do much about it.

As is detailed in Carbon Nation, the world requires 16 terawatts of energy to go round, and that includes everything from the subways to your microwave. Hundreds and hundreds of terawatts of energy are ripe for harvesting from our natural wind currents and received solar energy, but retrofitting our technologies requires foresight, money (up front, that is; the long-term savings should be enough to sway even the most environmentally disinterested for sheer income value), and the kind of leadership that is at best hard to come by in this financially corrupt society. Carbon Nation doesn't get conspiratorial -- it spends most of its time interviewing a plethora of individuals who, through all walks of life, have worked to reduce pollution and make a difference, however small -- but methinks enough wealthy oil pigs line the pockets of Washington to perpetuate this long-gestating atrocity indefinitely, until we pull our collective head out of you know where and realize that the profit motive rights of the few aren't so sacred and holy to the ideals of America as to usurp the quality of life of everyone else.

Carbon Nation isn't entirely my cup of tea, but it's slickly made and almost mathematically calculated as for wide appeal (everyone from the liberal choir to South Park Republicans), and never patronizes in the vein of Michael Moore or Morgan Spurlock. If it is to be a significant work, it will only be because it was actively used as a tool for enlightenment, which begs the question: will we mend our evil ways? Earth doesn't stand to lose much in the long run-- if we poison her enough, she'll wipe us off and regenerate her lost tissue over some thousands of years, and we'll become a boring footnote in the archeological history of some future race. Will we let the short-term greed of a few threaten our collective existence, or will the grandchildren of our grandchildren cherish our memory because we rose as one and did the right thing?