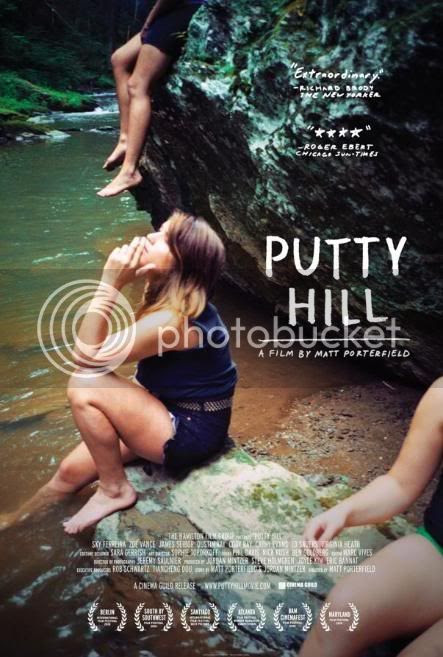 Few films are capable of evoking the tumultuous feelings that accompany life's tragedies -- most of them compartmentalize them for tidy drama, or ignore/forget them outright -- so it's a genuine breath of fresh air to find one that gives voice to the many conflicting, uncertain, and even regressive ways with which people deal with life's harsher blows. At the center of Putty Hill is Cory, a young man who just recently died of a drug overdose, an event that ripples throughout his suburban community as friends and family congregate (some of them from out of town) for the impending funeral. To some, like the young James (James Siebor), Cory's brother, seen playing paintball in the opening scenes, these events might seem to barely register; I was reminded of the almost pleasant numbness I felt the afternoon of September 11th, 2001, which I take it was essentially an overload of emotional input, triggering a total loss of responsive ability. Writer/director Matthew Porterfield keenly measures the pulse of these emotions and the manner in which people absorb them (or choose not to) into their routines and future plans. Like Rachel Getting Married, the loose ends with which Putty Hill chooses to leave its character are among its many assets; anything purporting conclusion would be a lie.

I haven't seen Porterfield's first film, Hamilton, but Putty Hill would appear to be a respectable evolution of his laid-back, peripatetic approach. Plot-wise, not much happens here (the film abstains from including the funeral itself, in a tasteful bit of privacy), all the better to focus on the drama that exists between the lines. Though obviously shaken by Cory's death, life goes on with a semblance of normality for the local residents: teenagers get high by the creek, skaters kill time at the park, a tattoo artist continues his trade, etc. In ways unspoken, the film speaks to the larger economic rifts that affect these people: with little in the way of educational opportunities, many have turned to dealing drugs in hopes of securing the wealth promised to them by the American dream, and the mind reels at the long-term damage being wrought today by greedy Wall Street employees, corrupt politicians and their sinful kind. Justice is hard to come by here, but that's just an accepted, however mourned, facet of life for these souls.

This refreshingly chill approach, alas, is disrupted via a sporadic series of well-intended "interviews", in which an off-camera voice (presumably Porterfield's) talks to the characters one-on-one, asking them personal basics and letting them vent emotional steam. Unto themselves, these scenes work, as they highlight Porterfield's knack for how real people talk and his excellent use of amateur performers, but they ultimately feel like an overt reassessment of everything else the film has already observed. Putty Hill works best, then, when it simply lets these people be who and what they are, unprompted and always without judgment. The wake scene, in which a delightful motley of characters sing and dance their way through their collective grief, achieves something of a quotidian transcendence. Whether it's the joyously impromptu screech of a surprised girl or the dead-end escape that concludes the film, Putty Hill's slice of life is bittersweet indeed.