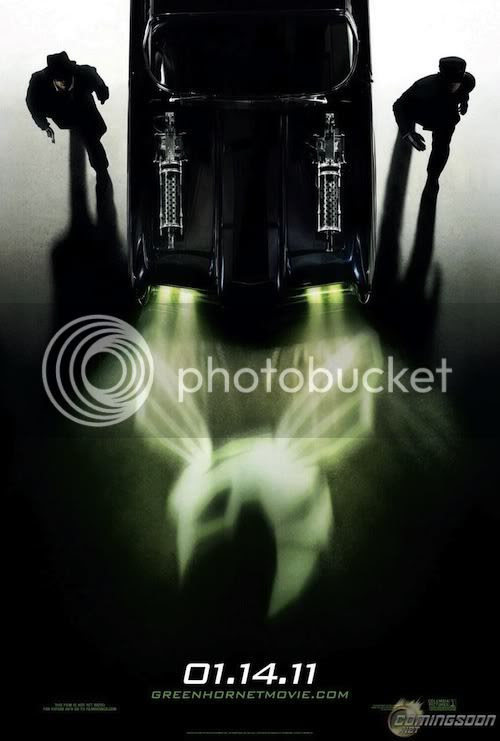 To these eyes, The Green Hornet falls into a general category of moderately successful films I tend to enjoy for one unifying reason: they may not be of any particular forte or quality, but they don't front their intentions and make for a pleasant and smooth, if perhaps a bit unmemorable, bit of distraction. I feel no need to ever again watch this glib adaptation of the popular superhero radio play and television series (neither of which I'm familiar with outside a broad cultural lexicon), unless perhaps I'm with friends and inebriated; I saw the film in sensible 2D, and I imagine that the kooky, frantic, and sometimes incoherent (especially during nighttime scenes) visuals would lose all magic and become sheer headache in the 3D format (with Jäger, it'd probably be a blast, so here's rescinding my former statement).

Director Michel Gondy's idiosyncratic flair is fairly restrained here, which is probably a very good thing given his lack of experience with action kinetics. He keeps things light on their proverbial feet, and lets the chemistry of the leads do most of the work; the two makeshift heroes, Britt (Seth Rogen) and Kato (Jay Chou) are so effectively relaxed together that when the script demands they be at odds, it rarely works (Rogen's character is frequently a prick, yet he's far too likable to be convincing). In the end, the streamlined approach and frayed ends make it all that much more snappy and glibly entertaining, and though roughly a quarter to a third of the material falls flat, the stream of energy being generated is swift enough that the negative effects never linger. Rogen's extensive creative involvement may be to blame for these rifts, but the only real tragedy here is Christoph Waltz's near-total under utilization; his self-consciously witty verbosity, though skillfully delivered, is too cutesy, lacks distinguishable flair and seems to have been hurriedly rewritten for the man who was Hans Landa.