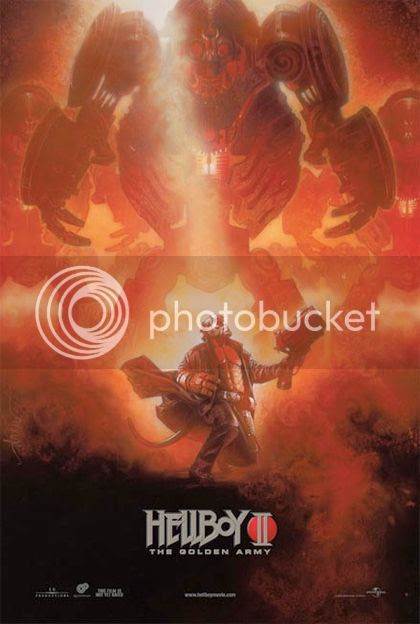 In 2004, Guillermo Del Toro's Hellboy stood apart from the usual slew of blockbusters with the most unlikely and smart-assed of characters to yet grace the superhero-savvy screen. In returning to the character after the Oscar-lavished Pan's Labyrinth, it only makes sense that Del Toro would take things to eleven; like the take-every-chance zeal of an enthusiastic young director's first film (Re-Animator comes to mind), he makes this one as if worried he'll never be able to make another. The resulting effect is a work of unexpectedly tremendous passion on virtually all levels. The creativity on display shames almost everything in George Lucas’s Star Wars universe, and there are times when Hellboy II brings to mind the everything and the kitchen sink mania of Sam Raimi's impossibly over-exerted Evil Dead II, making this a film prone to inducing sensory overload in the best possible way.

Hypnotic, brilliantly clashing colors light up the senses like an array of electrified stimuli with what must stand as some of the finest art direction in a recent blockbuster film, while Del Toro handles his CG-heavy graphics in such a way as to make them not a storyboarded fantasy, but a similarly roughly-hewn extension of our own world. The story begins long ago with the tale of a war between mankind and the magical races of the world (elves, goblins, etc.), one so punishing it eventually saw the creation of the titular army – the work of a master blacksmith goblin, and one unstoppable to all who did not command it. The agreed-upon treaty between the humans and non-humans was disapproved by one Prince Nuada (Luke Gross), an elf who now, after long preparations, seeks justice for his people and plans to unleash the Golden Army on mankind once again. Enter Hellboy (Ron Perlman) and company, members of an officially nonexistent government organization used to combat the supernatural away from the public eye (that's the idea, at least).

If the first Hellboy was about the loss of our fathers and the mystery of where we come from, Hellboy II centers on where we are going, and what we do when the mantle passes, a universal theme Del Toro fuses with his characters’ sense of isolation (from the humans they protect, from their own non-human kind) with a genuinely artistic heft. Subverting virtually every expectation associated with this kind of film (impromptu appearances by tumors and Barry Manilow are just the tip of many savory pleasures), Del Toro successfully renders his central characters not so much as outcast freaks but as just another link in the chain of an emotionally disconnected world.

Praise be to Ron Perlman, who again proves that this is the role he was born for. Even beneath layers of makeup, he exudes raw, unfettered humanity fronted by snarky attitude. The cast entire submits to the material with just the right mixture of self-serious posturing and sly self-awareness, with special nods to Doug Jones for three separate roles (his main part being a delightful fish-man with the unfortunate moniker of Abraham Sapien), and the sublime vocal work of James Dodd in a part best left undiscussed. Such performances root the film in something identifiably human, no small feat for characters such as these. Almost profound, the film makes one instantly long for more after its pseudo-cliffhanger ending has come to pass. Truly, sometimes the best things come in threes.