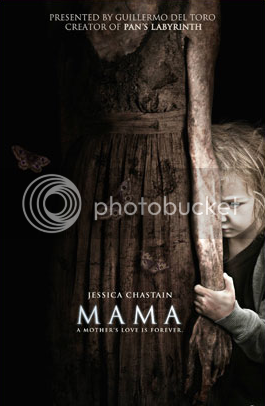 While not without a fair share of what is frequently referred to as "idiot plotting" - contrived circumstances indicative of shoehorned screenwriting - the surprisingly worthwhile Mama almost completely overcomes these flaws with vested characters, assured visuals, and performances as least twice as good as one might expect from a horror entry released in the dumping groups of January. The film begins with financial executive Jeffrey (Nikolaj Coster-Waldau) snapping amidst the latest economic downturn, killing his wife and co-workers and kidnapping his two young daughters. His brother Lucas (also Coster-Waldau) leads the unlikely search and rescue, finding young Victoria (Megan Charpentier) and Lilly (Isabelle Nélisse) five years later, holed up in a remote forest cabin, feral and malnourished. He and his girlfriend Annabel (Jessica Chastain) attempt to raise the brutish girls and undo the damage wrought by their isolation, a noble effort quickly undercut by the titular presence, a twisted, covetous ghost who took to protecting the girls during their disappearance. Director Andrés Muschietti (adapting the film from his own 2008 short) relies heavily on pounding decibels and negative space, not unlike any number of recent lackluster horror releases, albeit delivered here with a refreshingly tempered sleight of hand and a number of breathtaking, genuinely creepy sequences, none better than the hallway shot of Annabel doing laundry, oblivious to the supernatural happenings taking place just out of frame (although a terrifying showdown with the titular spirit, illuminated only by the flash of a camera bulb, comes close). Fairy tale overtones and a touching look at the long-term implications of abandonment go a long way in substantiating the film's weighty subject matter, the cherubic Charpentier and Nélisse almost exquisite as the emotionally/psychologically fractured siblings, the reliably excellent Chastain giving believable complexity to her character's dual feelings of personal yearning and burgeoning maternal instincts. Once the ambiguity of the ghostly scenario has been nullified and the untold stories haunting the past come to light, the creep-outs and supernatural bellowings (and occasional inconsistencies in character judgment) almost wear out their welcome; fortunately, Mama reveals itself as no mere shocker, but a thoughtful rumination on what it means to love, lose, and move on from life's cruel blows.