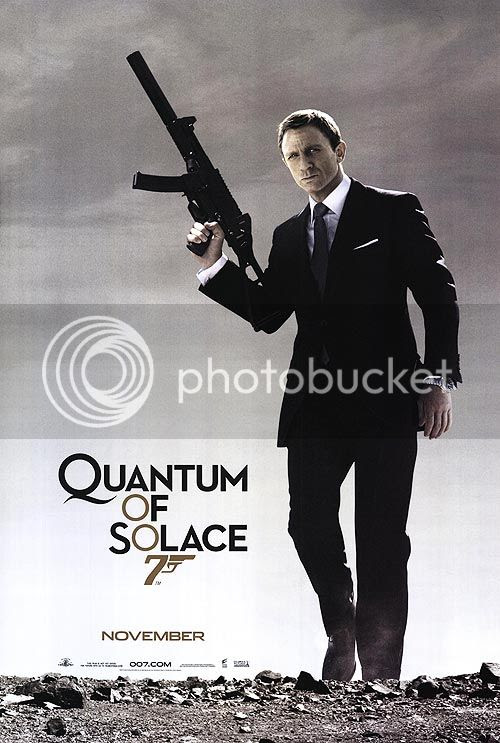 So often does the bad accompany the good in life, perhaps out of necessity, so that we may truly appreciate the latter. After the ravishing James Bond reboot Casino Royale – arguably the best in the series – it would appear inevitable that the next film ratchet things down a few notches; a cynical view, yes, but one reinforced by the dearth of sequels that rise to the occasion presented before them (The Empire Strikes Back, Before Sunset, and The Godfather, Part II notwithstanding). Quantum of Solace isn't completely execrable, but any box office gold it accrues will be purely incidental. That it wastes one of the best titles the series has yet seen is among the least of its offenses.

To say that sequels are doomed to failure is naïve, but with  Marc Forster at the helm, that the follow-up to Royale turned out to be one of the worst of the series seems more like destiny manifest. Hype indicated that this might be the first Bond film with Oscar potential, yet in attempting to appeal to the "legitimate," often hollow standards of the awards brigade, it forgot what makes good James Bond films tick so furiously. Daniel Craig – the best performer the character has yet seen – was largely responsible for this in his Oscar-robbed performance, yet even he can only pull so much weight with a script as thematically skimpy and a film so clunky in its assembly as Quantum. Like air escaping a punctured balloon, his effort goes to waste. Not unlike an old man relying on his cane, Quantum leans on the dramatic/thematic weight of its predecessor as a means to justify its own existence, routinely looking back in lieu of forging its own pulse. Once a slow-burning ember of self-immolating emotion, Craig's Bond has been offensively reduced to the 007 equivalent of a sulking teenager, and it’s to the actor's enduring credit that as much emotion makes it to the screen as possible.

Squandered from the opening, borderline-incoherent car chase onward, the film screams not only of screenwriter Paul Haggis's contrived methods of exposition, but Forster's unimaginative approach to filmmaking. From his own surface-deep take on the Peter Pan mythos in Finding Neverland to the outright disastrous The Kite Runner, he’s long been a filmmaker who prefers telling over showing, forgoing poetic expression for banal seriousness seemingly made with award show compilations chiefly in mind. Forster drops the torch that was passed to him, and chief among his failures is a dearth of visual continuity: something preferable for any motion picture, and a must for action.

Clueless is the only way to effectively describe the compilations of shaky medium and close-up shots that pose as action scenes; failing to establish any sense of the spatial relationship between the hunter and hunted, they instead play out as motion sans progression, like a videogame with respawning opponents and an unlimited ammo count. Inept to the point of neutering all interest in plot, Quantum may be the lousiest entry since 1975's The Man with the Golden Gun. This time around, Bond's biggest adversaries are those behind the camera.