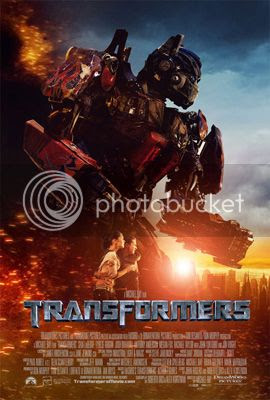 There’s a moment about two hours into Transformers (one of several, actually) in which one of the film’s many titular shape-shifting beings jumps and twirls through the air – in slow motion – in order to dodge two enemy missiles. It was at this moment, completely dumbfounded, that I caught myself with a stupid, silly grin on my face. Credibility is worthless if it isn’t coupled with integrity, and with that in mind I will freely state – not admit – that yes, I enjoyed a Michael Bay film, in the same way that I sometimes enjoy a Happy Meal with a meaningless yet fun toy inside. Bay is so obsessed with his overblown toys and explosions that any semblance of entertainment that manages to come out of his spastic efforts may very well be purely incidental, with the line between this film’s Saturday morning cartoon mayhem and destruction and Bad Boys II’s shitstorm of anti-humanism being a matter of tonalities, whether or not the context of their unrestricted bombast is a legitimate one. This is the first film he’s made in eleven years that I’ve managed to tolerate (let alone like), and like The Rock, Transformers is a film that very quickly divorces itself from the grounds of all reality, unpretentiously reveling in kitsch as a momentary escape from our cerebrums. Sometimes I like leaving my brain at the door, if and when appropriate, and Transformers is smart enough to know how incredibly stupid it is.

It seems quite worthless to go into plot details here, or anywhere for that matter – the film exists in order to get robots together and blow shit up, period, although it is remarkably keen in evoking superficial emotion as cheeky filler, an excuse to pile on the rock ‘em sock ‘em action. My gut tells me we should look in large part to executive producer Steven Spielberg for the film's success; unlike the majority of Bay’s resume, Transformers’ action sequences actually maintain something in the way of semblance, and though their sense of spacial relationships is indeed a bit wobbly at times in the heat of battle, they exhibit incredible improvement over Bad Boys II and The Island’s nauseating epilepsy (a statement not meant to be taken as faint praise). That the film contains nary an ounce of genuine human emotion is perhaps its most silently beneficial quality; anytime Bay has ever tread in the realm of human relationships (Pearl Harbor) or conflicts (Bad Boys II, again), it’s been to shit all over them with his reckless disregard for decency. However, given these popular 80’s toys and their inherent, inextricable silliness…well, the glove fits. The film is certainly limited by its material – there’s only so much one can do with robots who cheerfully recite such ridiculous dialogue as “Freedom is the right of all sentient beings!” as if it were of Shakespearean depth – but for what it is, it is perhaps as fully realized as it possibly could have been.