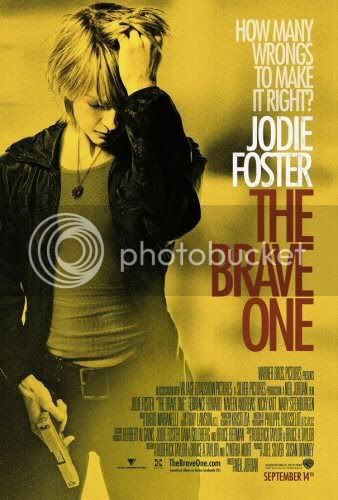 The Brave One suggests an addict who has yet to admit they have a problem. Although truly about a mentally fractured woman turned vigilante psychopath after a beating by thugs leaves her laid up in a hospital for three weeks, only to wake up to the news that her fiance was killed in the attack (all plot points readily pronounced in the previews, so don't cry spoiler), the film would like to pass itself off as a story about female empowerment—the kind of dunderhead regressiveness mistaken for social progress in a logic-free think tank. As it stands, it's a tepid concoction of morality lessons made easy via an overly literal sense of style-as-psychological-exploration; titular figure Erica Bain (Jodie Foster) understandably finds it difficult to venture outside her New York apartment after her devastating loss, but according to director Neil Jordan, the experience is one tantamount to wearing beer goggles on a weeble wobble. Gender violence kicks the bucket for a more general indulgence into shock-and-awe revenge fulfillment, the film purporting to criticize such eye-for-an-eye exchanges but doing such beliefs a disservice with its glamorizing aesthetic (no different than James Wan's equally vicious Death Sentence, but at least that film was honest about its nasty intentions). Foster—sexy and talented as ever—brings conviction to the contrived part (one example of her blah philosophies: "Now, I walk the streets at night. I find places that I never knew existed before. The question is, am I finding them, or are they finding me?"), though it is Terrence Howard who, as a detective striving to do good in a corrupt system, who provides the film with a much-needed emotional (and sober) epicenter. The Brave One's drawn-out morale—that change after an extreme loss is inevitable (the film never attempts to comment on New York post-9/11, though given its preexisting idiocies, it was probably better off)—can be considered in the bag after no less than the film's opening credits. If nothing else, enjoy Nicky Katt's hilariously smart-assed one-liners. As regards one of Bain's more deserving victims: "I'd say it was probably the fall that killed this guy... or it could be the crowbar embedded in his skull. I'd say it's about 50-50."