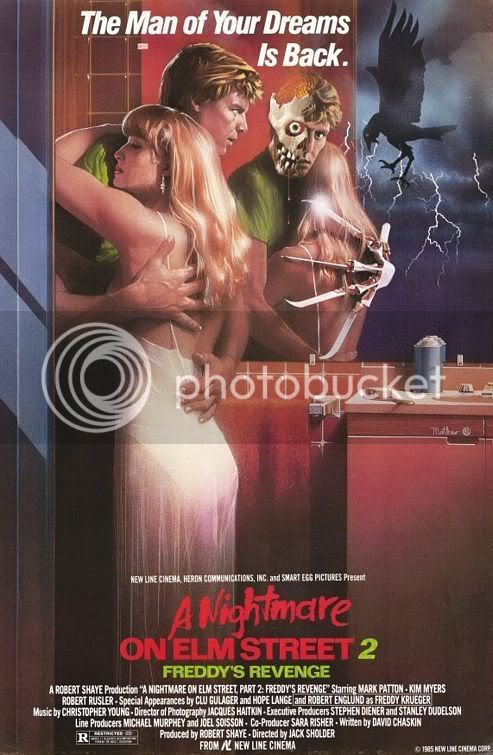 Amidst the frenzy around Brokeback Mountain, HellBent was hailed by many as the first gay slasher film. Though hardly unworthy of its accrued praise, a film more worthy of the title is the 1985 sequel to A Nightmare on Elm Street, subtitled Freddy's Revenge. Sleep remains the primary source of terror as Krueger returns to haunt the dreams of the Elm Street children - the offspring of the townsfolk who burned him alive years ago, in turn for his own murderous acts - this time haunting the young Jesse Walsh (Mark Patton), who nighttime terrors and subsequent depression/alienation strike his conservative father as little more than cause for good old-fashioned physical reprimanding. Krueger finds in Jesse a unique physical surrogate, able to manipulate the teenagers body so as to kill people in waking life and with anonymity to boot; in a standout sequence, Jesse overcomes Krueger's grip as the villain purports to murder the protagonist's young sister. While a cutesy relationship with classmate Lisa Webbers (Kim Myers, essentially a more fuckable Meryl Streep) echoes the charming innocence of the eras work by John Hughes, this surprisingly inventive sequel quickly and silently transforms into an effective allegory for gay rights amidst the 80's AIDS crisis, with Walsh's lascivious, sweat-covered form subjected to the violent/sexual transformations of his beastly host, his internal conflicts misunderstood and denied relief by the external status quo. Krueger himself remains almost exclusively a background figure, less terrifying in the flesh than as a psychological presence to be struggled with, the surrealist visions of his nightmare death traps not unlike the physical manifestation of his primary target's adolescent hang-ups. These qualities are limited, however, in that they are by and large mere compliments to the otherwise traditional narrative form at hand rather than subversions of such. Although Jesse and Lisa are granted some much-needed time to get it on, he and the film would appear in unison in that they're still waiting to come out of the closet.