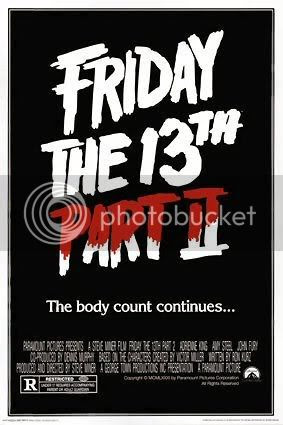 After the 1980 original, one might've been forgiven for thinking the Friday the 13th series had nowhere to go but up. Quality being relative, this is a fact that makes Part 2 appear better than it actually is, though its general competence remains a surprising improvement, albeit not one strong enough to elevate it far above its baser elements. Several years have passed since the slice-n-dice killing spree of the first film, enough time for the story of Jason Vorhees to take the form of local legend and his once-feared presence now regarded as little more than spooky superstition to scare kids into obedient submission. Camp Crystal Lake remains closed but nearby camping facilities have opened up to charitable (and sex-obsessed) teenagers, who go about their work hard, party hard ways, oblivious to the danger in their midst. Cheap voyeurism remains the defining trait of this follow-up, the camera an inconsistent "presence" used to evoke the perspective of a stalking killer as often as it is a producer of flimsy tension, the notion of charging the viewer as a responsible onlooker being far from this film's notions of cinematic possibilities. Jason proves a presence with a purpose, however, not yet hidden behind his culturally signifying hockey mask and thus allowed to act outside of such restrictive cultural tropes. Perhaps inadvertently, a sense of generational tension is evoked between the well-meaning campers and the local elders who know better; just as the teenagers drink and fuck to define themselves via separation from their parents, Jason kills in order to bring himself closer to his departed mother. The film's highlight doubles as a potential high-water mark for the entire series (an admittedly low standard), as Ginny Field (Amy Steel) attempts to sway Jason's murderous rage by impersonating the almost-inimitable Mrs. Vorhees. These moments of fascination, however, are not unlike loose parts flying around a junk drawer: potentially useful trinkets amidst a pile of garbage, too disjointed and incomplete to be of much use.