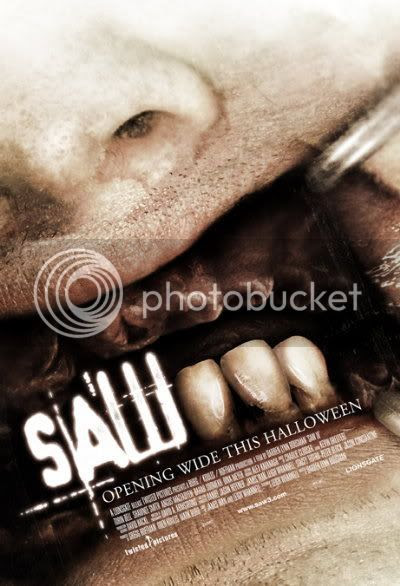 Sometimes less is more, and sometimes nothing seems damn near like a godsend. Such is the case with this rancid second sequel to 2004's surprise hit Saw, an affair of simultaneously astonishing boldness, unbelievable ineptitude, and blistering inhumanity - smug, stupid, and evil, respectively. As far as sequel amplifications go, Darren Lynn Bousman's second contribution to the series of flagellation is a been-there done-that affair, picking up where part two left off and continuing to complicate the previously established plot via a series of seemingly endless rewrites and increasingly histrionic plot twists, at once working overtime to justify itself as a necessary piece of the puzzle to the previous two films, while also desperately attempting to obscure the hidden-in-plain-view fact that this emperor never had any clothes to begin with. Jigsaw (Tobin Bell) is (finally) on his own deathbed, his body ransacked by cancer, and it is up to the newly kidnapped Dr. Lynn Denlon (Bahar Soomekh) to keep him alive long enough to bear witness his final "game", she fitted with an explosive collar linked to her captor's heart rate monitor, triggered to explode should the demented patient's heart flatline. Overly complicated plotting that need not be recounted here takes up the bulk of the film's running time, a series of indulgences that - like a prolonged sequence in which we see Jigsaw and his protege Amanda (Shawnee Smith) setting up the traps that encompassed the original film - prove interesting in the moment, if only for their glimmers of insight into the minds and motivations behind this overly orchestrated series of bloodlettings. These narrative cul-de-sacs, however, as well as several seemingly genuine examples of genuine emotional heft, ultimately prove nothing more than intentionally distracting time wasters, working both practically (so as to provide this unnecessary film with the status of feature length) and psychologically, ultimately positing the viewers themselves as the participants in the series' own elaborate and pointless death trap, the final scenes a case of cheap rug-pulling the likes of which this critic had never before seen. The Saw films' use of torture as the source of thrills has always been implicitly questionable (though, at least previously, never outright immoral thanks to their general silliness), but the gruesome games born witness to here - from a man nearly drown in liquefied pig remains, to a machine that unforgivingly twists the limbs of its occupant beyond their breaking point - succeed in making Mel Gibson's questionable Passion of the Christ exercises look like the work of Mother Theresa by comparison, offensive not so much in execution (sick though they are) but in the fact that they ultimately lead only to a dead-end "fuck you" to anyone reasonable enough to have an emotional response to them in the first place. By rewriting the events of both films prior, it goes without saying that this third entry reaches beyond its own breaking point of believability, not that its concerns lie anywhere other than smothering us in as much misanthropic cynicism as physically possible. Says Jigsaw during his final game: Face your fears. A lesson worthy of praise, if the film preaching them weren't so completely full of shit.