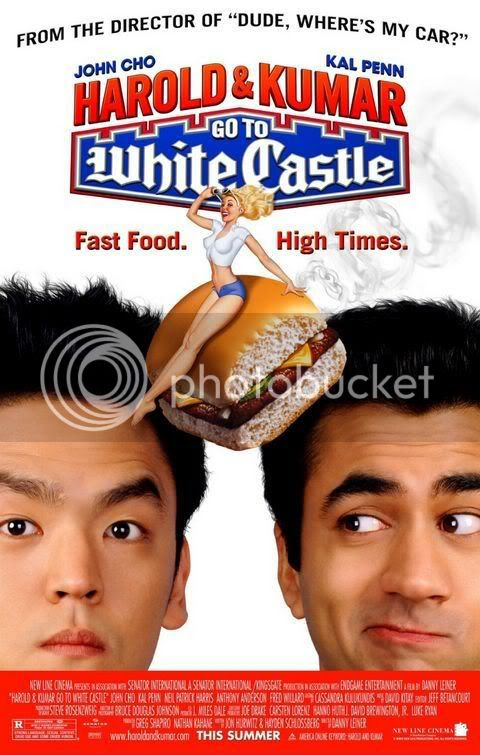 A somehow tastefully modernized version of "Also sprach Zarathustra" plays over the climactic scene of the appropriately titled Harold and Kumar Go to White Castle, an effective touch given the manner in which this sleeper hit epitomizes stoner yearning for munchies as a miniature odyssey unto itself. Knowingly and effectively pedestrian in its visual style and focus (or rather, lack thereof) on continuity, Danny Leiner's film disregards detail work in favor of focusing on a singular narrative thread, a path from which it cannot veer no matter what distractions lie outside its stated primary objectives. Utilizing visually straightforward framing devices and unabashedly cheap special effects work (most apparent in its deliberately unpolished blue screen compositions), Harold and Kumar is not unlike its toked-out protagonists and their "White Castle or bust" attitude when it comes to their Friday night cravings, unwaveringly intent on getting the job done, even if a little messiness is unavoidable in the process.

Such is a quality that provides numerous Plan 9-esque laughs, such as when night transitions abruptly to daytime or when fake blood moves or disappears altogether from one shot to the next as our protagonists are attacked by an obviously fake, puppet raccoon. Realism and technical astuteness are small change compared to timing and carefully moderated physical gestures, and John Cho and Kal Penn's (Harold and Kumar, respectively) ability to underplay absurdity often comes within arm's reach of perfection (the latter's forehead alone is an immense comedic weapon, wielded here with silent ferocity). Effectively feigning pothead motivation, Harold and Kumar knows what it wants and will let no obstacle stand in its way; no moment may be more in tune with stoner rational than Kumar's decision not to return to his apartment for his cell phone, the thirty foot walk being "too far" a distance to go back. By containing their premise to such a small scale, screenwriters Jon Hurwitz and Hayden Schlossberg render the titular journey almost profound.

Less noted but equally (if not more so) important is the manner in which Harold and Kumar upends racial subjugation within the traditions of the raunchy American teen comedy, not only correcting the destructive stereotypes its protagonists have long occupied in such films but allowing their respective minority groups to finally claim their own, long deserved piece of the American dream, complete with illegal substances and poontang (when Kumar states that their journey to White Castle is about more than just the acquisition of hamburgers, he speaks for the film itself). The passive racism of many sex comedies was effectively skewered by the original preview, which billed the film as starring "that Asian guy from American Pie and that Indian guy from Van Wilder", literally restating what the majority of its viewers had muttered to themselves not moments beforehand. Harold and Kumar trades not into stereotypes, however, but delightful caricatures, sending up the absurdities of racism (such as when a precinct of white power policemen arrest and beat a black man soon as look at him) with both wit and gravitas.

Harold and Kumar juxtaposes this reductive sense of race to everyday (and not-so-everyday) experiences of American minorities, its many 420-inspired scenarios no worse for wear as its protagonists mount the obstacles imposed by the often insane and idiotic Caucasians around them. Road rage, declarations of arson, wild cheetahs, redneck orgies, hang gliding and Neil Patrick Harris all figure into the mix before the night is over, and though the humor is routinely evoked from subverted expectations that go well beyond reason, its most effective sequences - such as Harold's worst-case-scenario elevator encounter with the girl of his dreams - are those that keep the steams of anxiety bubbling throughout. Too bad, then, that Harold and Kumar sporadically finds itself slacking off, slipping into a lazy stoner groove when it should be rigorously imitating one instead, thus illustrating the worlds-apart difference between being stupid and acting stupid. Sometimes-maddening inconsistencies notwithstanding, however, the film has already established itself as a deserving modern classic, if only for being so bold as to describe Katie Holmes' breasts as being "the exact opposite" of the Holocaust.