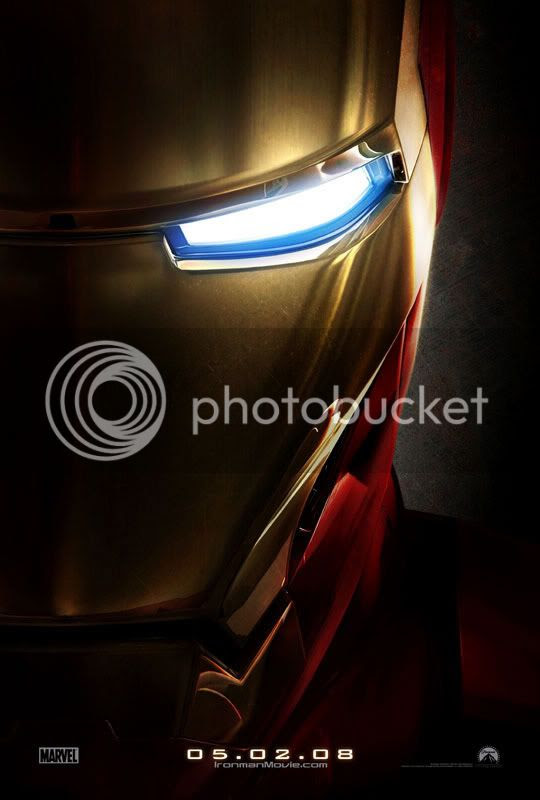 Solid and funk-free, Iron Man lovingly tosses the American ego about like a cat with string, mixing things up just enough to remind us that, when we get down to what's really important, there isn't that much separating traditional red state muscle from blue state radicalism (among other factors, least of which are the deceivers and thieves among us). All within the space of a traditional nuts-and-bolts studio summer picture, that is - the area in which Jon Favreau's very-capable Marvel adaptation succeeds most broadly, its barely-hidden subtext deliberately de-politicized in favor of more a more universally guided moral compass.

As pop entertainment, Iron Man has equal parts brain, brawn, and balls, but what it doesn't want you to know is that it has an equally bleeding heart. Titular superhero creator and billionaire weapons manufacturer Tony Stark (not so much played as executed by a bullwhip-like Robert Downey, Jr.) finds himself held captive by nomadic troops in Afghanistan, intent on using him as their latest tool in the War on Terror. If you've seen the preview, you know he breaks out of this prison, suited up and armed to the teeth like a prehistoric Frankenstein monster. What could have easily been just another dumb exercise in "nuke 'em all" idiocy becomes complex, then, when an escaped Stark declares his weapons factory closed in favor of more effective weapons of peace. Nearly blown to bits by his own shrapnel, he recognizes the dubious nature of war, its morals, and its victims: when the weapon system of his futuristic superhero suit distinguishes, with ease, between a group of terrorists and the Afghan women and children they're holding hostage, he may well be the most kick-ass Boy Scout ever to grace the silver screen.

Fitting, then, that the titular superhero character was first created in the early 60's as an all-around good guy patriot defending the world (first against communists, then more widely against evil) while furthering the advances of technology. He is U.S. industrialism's mechanical heart, one well satisfied with his role as king but one first and foremost intent on equality and order. If the final scene is any indication, Iron Man acknowledges this without hesitation, in a way serving to correct the knee-jerk boot in your ass superiority that evoked so many anti-American feelings post-9/11. With a virtually neverending supply of quips at his disposal, Downey almost brilliantly conveys this humbled elitism with equal levels charm, ego, and admission, his incredible downplaying scoring most of the laughs and his many stumbles reminding us that even our biggest of heroes had their days off. There's always room for improvement.

So then, temporarily switching out of cultural commentator mode, how does Iron Man stack up in the "entertainment" department? If I say it's entertaining and attention-grabbing, that's enough to convince many people that, yes, it's what I'm expecting from the previews and I feel confident having already decided to pay $8-$11 for it this weekend; I humbly state, then, that I require more from a film than it merely passing the time without my noticing. Nevertheless, props are due for the how the accomplished CG gets its due time in the spotlight without cramping more cardinal elements from moving forward (unlike the horrendous would-be spectacle of X-Men: The Last Stand), and in many such ways does the film exhibit learned craft and intuition in acknowledging what is most important, and when. Iron Man is fine entertainment indeed, an almost perfectly structured machine only sporadically and minimally undone by adherence to dramatic form (Stark's relationship with Gwyneth Paltrow's assistant Miss Potts, though bubbling with romance, is a weak link), which it executes with precise - if a bit roughly-hewn - skill.

Even speaking in just those terms, it's one impressive in its exhibited respect for the audience; it doesn't attempt pontification, but nor was I inclined to feel like a toddler as I do during just about any Marc Forster film. Yet whether we view things through specific "political" terms (a habit I'm glad to be mostly out of) or a more broadly social lens (i.e. how does this relate to real people now/always?), it can be stated that all good films are genuinely about something - not just plot points of who stole what money when or will they guy get the girl back this time, but themes and ideas greater than their isolated instances. This has always been the buried life support of genre films, those that knew how to inject an at-first-glance simple story with loaded emotional signifiers and passively explicit morality tales. Personality extends, then, to the film's hardware, from the all-but-fetishized Iron Man suit to Stark's penchant for an active (in more ways than one) lifestyle, equal parts wish fulfillment and emotional illuminator.

It is here that Iron Man nestles comfortably, far from the lofty reaches of Assault on Precinct 13 (one of the greatest action films ever made) but similarly empowering in its self-reflection, re-articulating American angst as altruism gone astray. As with Die Hard's faux-terrorists, Iron Man wages not against the politically oppressed (thus avoiding ideological quagmires likely beyond the reach of its genre tropes) but the purely treacherous and selfish, a milkshake-drinking legion well dispersed throughout the lands, including our own. By acknowledging that fact, Iron Man hardly makes the troops look bad (to use a term made odious in its excessive and inappropriate usage) - it ditches the bad apples and gets things accomplished without fronting its vices in the process.