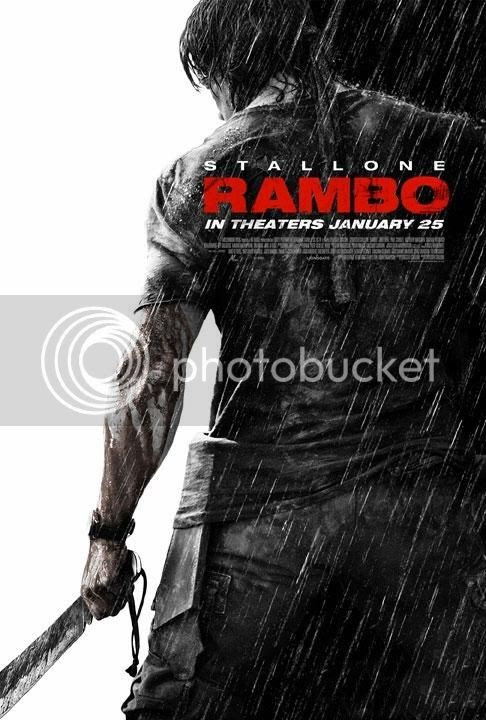 If we critics fall victim to any one pitfall, it's that simplest of traps: judging a book by its cover. I first saw the career-defining First Blood earlier this year and was taken aback by its decidedly non-shoot 'em up story and execution, in much the same way that my then 9-year-old mind was completely blown away on first encounter with The Terminator, another classic film whose unique moral qualities and humane inquiries are routinely usurped by its popularity within - and subsequently caricatured pigeonholing by - pop movie culture. Of course, it's easy to become cynical without being deliberately so, and though I've yet to see either Rambo: First Blood Part II or Rambo III (is this the most inconsistently titled movie series of all time or what?), I wasn't exactly holding high expectations for the fourth entry, titled simply Rambo. Of course, the whole concept of expectations is something I'd like to banish from criticism, but to seriously attempt such would be to imitate Don Quixote raging against the windmills.

Consider, then, this newest entry in the Rambo franchise, also the latest in mainstream cinema's implicit responses to our current political moment; nearly all films reflect their times, though these troublesome ones seemingly encourage our artists to do so more explicitly. Stallone uses his iconic character here to explore the necessary evils of violence through a brutal pop lens, recalling his own role in fashioning 80's cinematic actioners and how those films have influenced not only subsequent works of the genre, but an entire generation of moviegoers weaned on them. Approaching his subject matter with a matter-of-fact, workman-like artistry, Stallone's Rambo purports nothing more than it shows, sweaty and bloody and matter-of-fact in both its ideas and attitudes. The rejected American soldier now resides in the jungles of Burma, where genocide is an everyday reality as entire villages of underdeveloped farmers are subjected to the vicious whims of a greedy military colonel. Audiences may snicker at Stallone's age but such befits the bone-wearing wisdom of his character's place in life, having long fought for justice with little to nothing in the way of long-lasting success. Worldly systems too great and vast to permanently disrupt are in place that only perpetuate violence against the innocent, and when a band of Christian missionaries looks to him for help in aiding the oppressed, he tells them matter of factly: "Live your life, cause you've got a good one." Rambo doesn't quite say that it's impossible to fix the world, but it knows in its bones that it takes more than a few rebels working together to do the trick.

I'm as bleeding heart as they come, but infuriating to me as well is the often-legitimate insinuation that all liberals are whiny tree huggers who'd rather turn tail than fight back in the midst of a terrorist attack. Though it goes without saying that Rambo isn't in the same ball park, league, or sport as Steven Spielberg's morally challenging Munich (which complicates the issue with the downward spiral of revenge), I'm glad to see a relatively mainstream film boldly and appropriately establishing the need for violence in a violent world, even if Stallone chooses not to delve into the widely-differing set of morals required when functioning in wartime versus diplomacy off the battlefield. Neoconservatives would have us think that there exist no worthwhile politics that can't be handled with shock and awe style carpet bombing, but equally important is the fact that sometimes there's no other choice but to shoot back. Threatened by a boatload of pirates eager to rape his lone female passenger after killing off the men, John Rambo shoots first Han Solo style, necessarily and unapologetically, kill or be killed. By the end of the film, even the whiny Christian who tells John that "taking a life is never right" has beaten a few thugs' skulls in with a stone. Rambo's emphasis on violence, then, isn't an exercise in wanton catharsis but an admission to unpleasant necessities - only a sick person would actually enjoy the onslaught of exploding heads and severed limbs as featured here, which are shot plain and ugly, without fanfare. First Blood remains the ultimate Rambo film because it asks us, what are our leaders doing to fix the situation while our brave men and women do what is asked of them? Even more so in a post-9/11 world, guns aren't a solution, merely a temporary fix. Eventually, they'll run out of ammo.