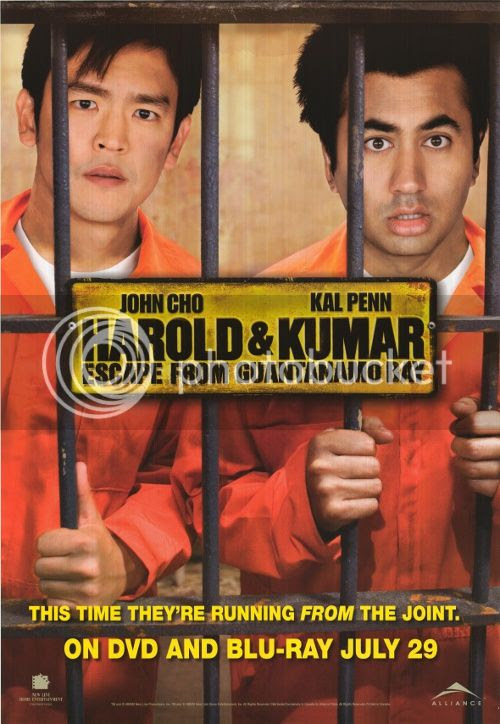 A second Harold & Kumar should have been, by all means, that typical second film that proves backwards and stale in every way its predecessor proved surprisingly otherwise. Key, then, is this sequel's sly self-awareness, indicative in its actualized satire and constant need to one-up itself, as if countering its own semi-pointlessness and pedantic plotline. Picking up immediately after the semi open-ended conclusion of the original, part two starts the self-reflexive irony out thick with some flowery, Louis Armstrong-accompanied credits, its effectiveness not coming from the choice but by the protracted execution. The credits allow the subtitle Escape from Guantanamo Bay to appear separately, thus upsetting the "What a Wonderful World" context more subversively than an abrupt soundtrack change would have. Only halfway into establishing the next scene, then, does the film go lewd and crude, cutting to Kal Penn's fast food-inspired bouts of diarrhea, laying on the linguolabial trills and expectorated bodily fluids as thick physically as they are metaphorically. It is in such a way that the appropriately titled film is carried out, and it is similarly appropriate, then, that the subtitle refers not to a stated goal in this case, but (practically) a starting point.

A spur-of-the-moment trip to Amsterdam goes awry when the impatient Kumar decides to smoke on the flight there, confusing an old woman into thinking them terrorists - beard, turban and all. "Bong" sounds like "bomb", and in many similar acts of confusion does government agent Ron Fox (a perfectly hateable Rob Corddry) idiotically suppose our two heroes to be jihadists bent on the death of innocent civilians (in a moment of soul-crushingly spot-on mockery, Fox questions a subordinate's loyalty to America by asking him if he likes to see little Caucasian girls getting raped). White Castle so perfectly established its characters as a gadflyish presence in our society that it can only deviate to the routine of newly introduced characters, providing our protagonists with an inferred backstory beginning with Kumar's college love interest, who is now preparing to marry the same Republican big shot who linked Harold up with his unsatisfying job. Things go far more smoothly than that last sentence, though, and it isn't long before H&K escape the titular prison back to Florida, having just evaded the task of giving head only to find themselves at a "Bottomless" party (to change the pace from the more popular means of breast exposure). And then a very atypical backwoods trailer. And then at a Ku Klux rally. And so on, upward, until Neil Patrick Harris is back with a unicorn and Dubya tells of his love for New Jersey weed (and his fear of Dick Cheney).

Quite wisely, the movie doesn't even attempt to recapture the singularity of the original, and its go for broke, scattershot silliness isn't always as hilarious as it is incessantly amusing, skewering the persistently self-imposed ignorance of racial and cultural stereotypes with a revealing and scathing bite. Ron Fox constantly bemuses (he attempts to "torture" two Jews and a black man by pouring coins and grape soda out of a can in front of them, respectively), but it is the Commander in Chief that proves most hilarious, an imitation by James Adomian made all the more amusing so by the simple virtue of featuring the indelible image of Dubya passing a joint with two "terrorizers". Guantanamo Bay avoids the offensive negation of potentially trivializing its subject matter by keeping things, no matter how ridiculous, rooted in the long-term reality of its lead characters (future job/life prospects, the links of a long-term friendship), while also dishing out the laughs on the people responsible for such horrors (the War in Iraq, the titular location, etc.) rather than those unjustly suffering their consequences. As before, Harold and Kumar come out of it all a little wiser and no worse for wear. After two films of their joyous irresponsibility and hedonistic pleasures, I can say with confidence that I wouldn't want to live in a world without them.