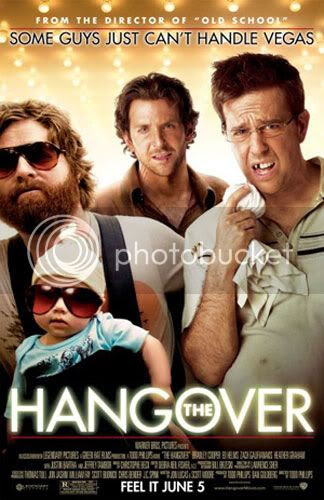 The Hangover is a cheat, and not just because it's the latest, altogether lousy production to take the box office by unprecedented storm (already enough to reserve its status as one of the great overrated comedies of our era, and rest assured, this thing will only become more ungainly on DVD). Even viewed apart from its sterling reception, its disappointment stems from an inability to ever fully take off, like a airplane bolted to the runway. An amusing set-up - in which three friends (Bradley Cooper, Ed Helms and Zach Galifianakis) find themselves in the Nevada desert the morning after a bachelor party gone awry with the soon-to-be-married guest of honor nowhere to be found - ultimately goes all sorts of nowhere, the screenplay an overly and obviously scattershot attempt to cover as many broad humor bases as possible and one whose attempts at randomness instead bear the comparable spontaneity of a deliberately dropped anvil. With it, Todd Phillips cements his status as perhaps the most lethargically unironic comedy filmmaker working today (only the cheeky, self-reflexive Road Trip seems worth watching outside the walls of an alcohol-flooded frat house). Despite a few instances of legitimate comedic shock value (the end credits photo montage is an easy high water mark, albeit one that comes far too little too late), The Hangover stinks of committee production values; that the preview for the film is infinitely better than the final work says as much. Worse than its paint-by-numbers execution, however, is its total lack of empathy. Exclusively defining its characters via their non-femininity and non-homosexuality, the lack of scrutiny or definition given to their behavior slowly drowns the proceedings in a sludge of astonishingly obnoxious self-righteousness. You might call these guys flamingly straight, but you'd be just as well off saying they're unrepentant dicks. In a world with Superbad and I Love You, Man, The Hangover's witless regression is unforgivable.