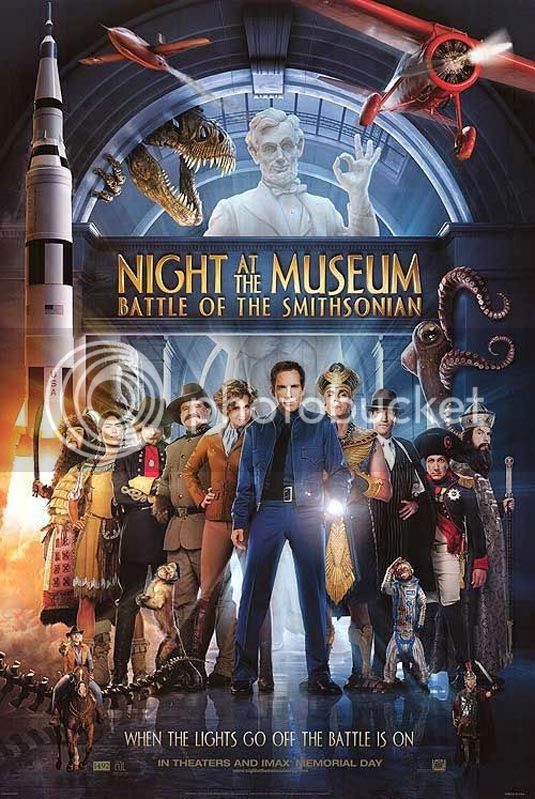 Back in 2006, I decided it would be wise to simply let the demographic at which Night at the Museum was aimed enjoy it, leaving my hat out of the proverbial ring. Having just endured the Happy Meal come-to-life sequel Battle of the Smithsonian, I now wish that I'd maintained that outlook. Shawn Levy reprises his directorial post in one of the most purely inept cinematic contraptions in recent memory, a parade of witless eye candy, weightless special effects and watered-down cultural references that threaten to make the Shrek sequels look desirable by comparison. Ben Stiller's Larry Daley has retired from his career as a night guard and now markets useless schlock pitched by George Foreman on early-morning informercials; a visit to his old stomping grounds reveals that the exhibits - which come to life whenever the sun goes down - are to be shipped out the following morning, permanently stored away and replaced by easier-to-maintain holograms. As a resurrected Amelia Earhart, the always-reliable Amy Adams is the lone saving grace to be found herein, which is a nice way of saying she's all that kept me from pondering "to be or not to be" during the film's contemptuous dumbing-down of every cultural corner it manages to lay its greedy hands on (which is to say nothing of its failure to establish anything in the way of basic spacial relationships or remotely believable timing in its action setpieces). From the revealingly inane decision to portray Al Capone in black and white to the should-have-been-hilarious-but-they-dropped-the-ball-anyway sequence involving Oscar the Grouch and Darth Vader to the inclusion of half the supporting cast from The Office, Battle of the Smithsonian isn't a movie even half as much as it is a feature-length advertising campaign for its idiotic self.