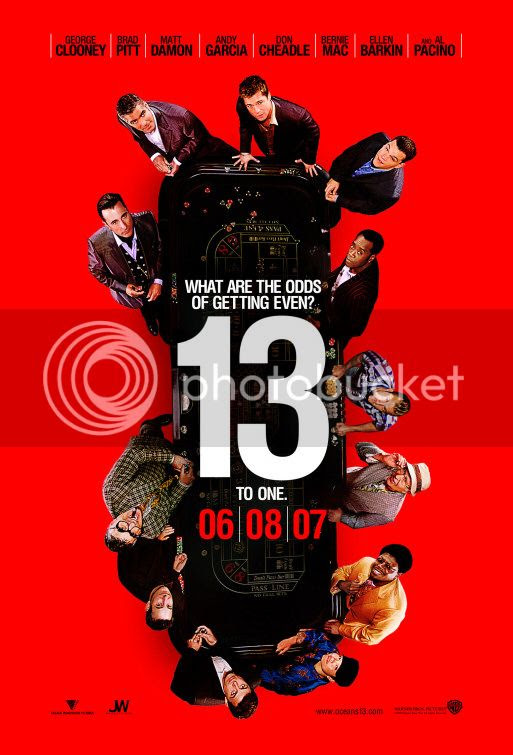 The cast of Steven Soderbergh's Ocean's films are truly irreplaceable, mainly in that his plethora of iconic celebrity faces exist for little purpose other than to play themselves as the exclusive members of some ridiculous pop culture phantasmagoria. George Clooney and Brad Pitt aren't Danny Ocean and Rusty Ryan - they're George Clooney and Brad Pitt sporting pseudonyms so as to justify having taken $8-11 of your dollars rather than the mere $2 needed to acquire the latest celebrity gossip magazine. Willie Bank (Al Pacino) is this threequel's lead newcomer, a hotel manager elitist who screws series veteran Reuben Tishkoff (Elliott Gould) out of his rightful half of a new casino to be built in Vegas, leaving him not only ruined but with a near-fatal heart attack as a result. Enter Danny Ocean and company to right this wrong by means of upsetting the opening night of Bank's casino by whatever means necessary (at its most extreme, the crew seeks to simulate an earthquake beneath the precarious Vegas location). In this way, the film stands as little more than a feature-length rendition of Home Alone's booby trap sequences, although missing here is the payoff otherwise so precariously built up to. This isn't so much offensive as it is monotonous and boring, as little about Soderbergh's wobbly construction seeks to exist out of the moment of its own self-designed superficiality, ultimately adding up to less than the sum of its parts. Invoking everything from Zapata revolution to Oprah's "Favorite Things" with only passing acknowledgment of a world beyond its star power circle-jerk, the film is a cocky and condescending indulgence test for anyone who hasn't automatically bought into its faux-cool suave. Part of me would like to say that the focus on the minutiae details of this third heist's orchestration falls into the realm of entertainment (and certainly, there are sporadic humorous moments), but Ocean's Thirteen remains a film more intent on amusing itself than in ever throwing the audience a bone. An auteuristic nightmare, the film encapsulates God knows how many elements of self-proclaimed "indie" cinema and smug retro stylistics; Soderbergh coheres these elements that have inspired him, but to what extent, save for an continuously incessant visual clash that rubs our faces in primary color hell? This is a film without a dream, without virtue, without love for anything other than itself. Forget replacing the cast - like Julia Roberts and Catherine Zeta-Jones from the previous installment, you can lose them altogether and call it a day.