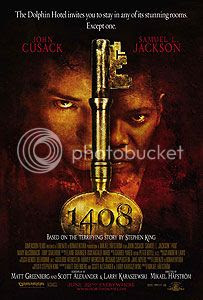 Stephen King isn’t a great writer in the sense of great literature, but give the man due credit for knowing how to effectively rework our cultural hang-ups through his pulpy, genre based page-turners. This latest adaptation of god knows how many novels and short stories from the modern master of pop horror is a savvy slab of undecorated cheese, made compelling by its unflinching willingness to dive into the material headfirst, undaunted by the difficulty inherent in selling such an admittedly silly ghost story. The tenuous lines between sanity and madness, life and death, and the self and the other make up the rope bridge 1408 daringly crosses, inviting us to come with it. John Cusack – in a role undeserving of his talent but all the more worthwhile because of it – is Mike Enslin, a skeptical writer who has made a profession of exploiting popular ghost stories and legends in the name of profitable book sales, visiting so-called haunted locations for inclusion in his latest spooky compilation. Enter the New York’s Dolphin Hotel, where the local manager (Samuel L. Jackson) pursues every possible means of dissuading Enslin from staying in room 1408 before unhappily granting him his legal right to occupy the otherwise vacant room. Dozens have died in the room over the years – some seemingly impossibly so – though Mike remains unconvinced that he will succumb to whatever evil forces supposedly reside in the quarters. But a few minutes in the enclosed space, however, and his mind definitely begins to change; like an updated episode of The Twilight Zone, walls begin to shift, beings appear, paintings become animate and other ghastly occurrences transpire – whether or not Mike has simply gone insane is itself a possibility, the likeliness of which regularly ebbs and flows. The film lacks substantial artistry, but its no-frills depiction of these increasingly bizarre events doesn’t lack for to-the-point effectiveness, itself an appropriate route in presenting King’s to-the-point story of death and the beyond. Major props are due for Cusack in an unlikely but great performance, his slow decent into reason-deprived madness emboldened by a brave detachment from much that is considered to be “proper” acting. There may be hope left for mainstream horror after all.