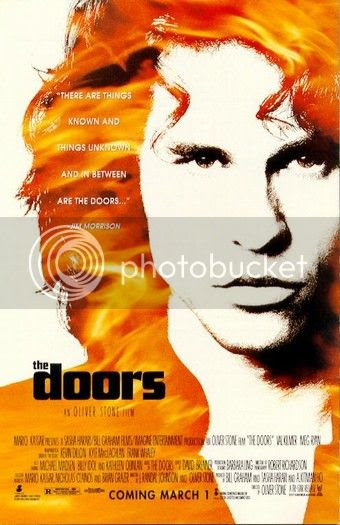 It doesn’t take much experience in the way of mind-altering substances to know a bad trip when you see one, and Oliver Stone’s The Doors plays out like an epic hangover one expects to never recover from. The film is overwhelming in all the wrong ways, and while, theoretically, such an assaulting effect would seem the correct one for a film detailing the perpetually overindulgent life of rock god Jim Morrison (the title refers less to the name of his band than the meaning behind said name, that being “the doors of perception”), the effect remains one of unrestrained, unpleasant bombast, attacking the mind as opposed to tingling the subconscious. It’s the unfortunate result of a respectably risky gamble on the part of director/writer Stone, as The Doors remains one of the least narratively driven big-budget biographies ever undertaken, often deviating from any sense of story to make way for folksy collages of sight and sound, simulating Morrison’s own artistically-inspiring head trips. Stone remains, unfortunately, perhaps too literal-minded a director to make these sequences effective; time-lapse shots of desert landscapes and the glaring sun add up to less than the sum of their parts, while the appearance of Native American chiefs in a dance ritual on stage with a drunken Morrison is hilariously juvenile in it’s envisioning of the communal artistic spirit. Even the more traditional sequences suffer from the excessive condensation required to stuff as much history into the film’s running time as possible; an opening band jam comes to mind, in which two of The Door’s biggest hits – “Light My Fire” and “Break on Through (To the Other Side)” – are practically written on the spot. That such unfettered genius could have taken place is of no doubt, but The Doors tries to sell its schematic portrayal of these events with a disingenuously casual flair, exposing its own unimaginative approach while also disserving the creative process at hand. Technically, the film’s recreation of the 60’s era is spot-on, but the film never sells the spirit of the time period it dutifully frolics in – it’s all flower-power behavior and hippie philosophies reduced to a few sentences of sound bytes, with none of the political motivation or existential longing coming through as anything more than lip service. Stone can be commended for his efforts to immortalize Jim Morrison’s self-destructive genius on film, but this take renders the much-worshipped front man as little more than a caricature ready for consumption by the Music History 101 crowd.