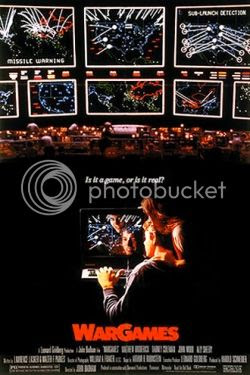 If Dr. Strangelove represents cinema's subversively hard-edged attempt to right the wrongs of the Cold War, then WarGames is that film's fuzzy antithesis - a gooey 80's coming-of-age tale that approaches its life-or-death subject matter with a surprising level of maturity, given its unabashedly Cracker Jack tone. It's a disarming and appropriately deceptive move on the part of the filmmakers, for just as the film's protagonists ultimately wield their uncorrupted youth so as to show their military-bound elders the error of their ways, so too does WarGames channel the fresh wisdom of its seemingly light genre into something far more sinister in nature. Granted, even in its darkest moments, the film hasn't nearly the despair of Kubrick's satirical masterpiece, but it retains the same underlining moral questions in its portrayal of these unimaginable dilemmas. A young Matthew Broderick is David Lightman - a relatively unpopular boy at school but a virtual god at home with his computer, which he uses to hack into any number of digital facilities for his own benefits, the least of which is changing the failing grade of the girl he likes as a means of impressing her. His eagerness to play a newly advertised video game system, however, leads to his inadvertently hacking a top-secret government computer programmed to run every imaginable scenario should World War III become a reality. Unfortunately, while the system was first installed as a means of bypassing flawed human decisions during a time of crisis, the computer's drawbacks begin to make themselves apparent after David's accidental breach - namely, in that the computer doesn't much consider the difference between a simulated war and a real one. Such questions on the use of artificial intelligence have long been asked by the science fiction genre, but WarGames adds new potency to the equation by relating such scenarios to those firmly grounded in reality, particularly during a period of time during which many believed the world would surely come to an end. During its tightly strung climax, the film looks headlong into such a scenario, in effect feeling - in the words of George C. Scott's General 'Buck' Turgidson - the wings of the angel of death, fluttering over its head (as well as ours). In doing so, it appreciates fully not only how much we have to lose should we ever allow our penchant for self-destruction to get the better of us, but also the ease with which such horrors can be avoided.