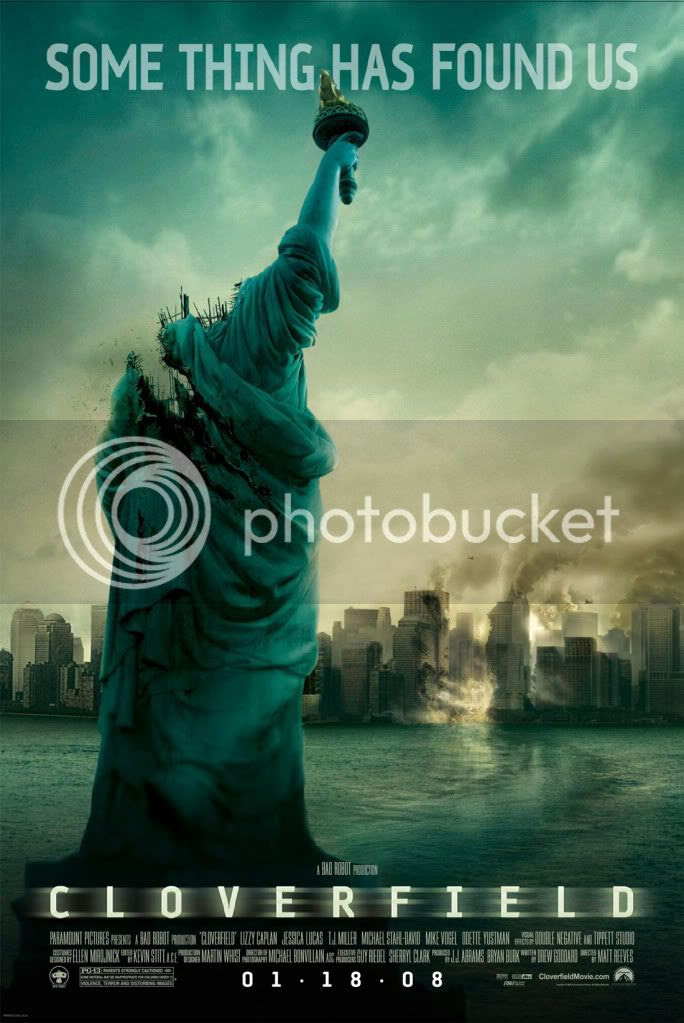 A second viewing of Cloverfield confirms that this experimental pop feature has more to it than I initially recognized; the impact of hype on my initial impressions notwithstanding, I think it a telling fact that my gut response was far more embracing when viewing the film on a comparatively small television, as opposed to the epic cavern of the classic single-screen theater just down the road from my Alma mater. Like Brian De Palma's similarly conceived Redacted, it is a work rooted in the aesthetic of a non-cinematic visual form, a fact that doesn't make theatrical exhibition wrong, per se, but one that significantly impacts the ways its imaged are consumed under various means of presentation, the reduction in size carrying with it a reduction in its apparent "entertainment" qualities, regardless of whether or not Cloverfield wants us to be thrilled by or fearful of the events onscreen. General thematic limpness being chief among its weaknesses, the film fails to beckon its chosen medium, instead subject to the whims of the form it unsuccessfully attempts to dominate.

The aesthetic of the first time camera operator is one we all know well, unless, that is, we've never been forced to either (a) document a party or event as our cinematographer Hud (the very good sport T.J. Miller) has, or (b) watched such almost-nauseating recordings after the fact (for the record, the style, both real and feigned, has never bothered mine eyes, so get the deal about it I do not), and as such it is one more appropriately at home on the small screen, especially given the straightforward manner in which producer J.J. Abrams and director Matt Reeves has conceived their baby. The Blair Witch Project still owns, not the least because its supposed "makers" were, in fact, filmmakers, and as such utilized their talents in a way that, by the very nature of their recordings and their relationship to them, transcended mere technical artifice. (Spoilers ahead.) Cloverfield similarly bears witness to the long-gestating deaths of its incidental protagonists at the hands of some mysterious force, but the film never aspires to subvert the home video genre, merely utilizing it to tell a Godzilla-type story (or rather, a story with a Godzilla-type creature in it) in a different way than its genre has traditionally embraced.

To be clear, I still find it wanting in too many ways to champion, but - and it is possible that my initial impressions were unawaringly swayed by gorging media hype, among other things - Cloverfield emerges now not as a hollow shell, but as some kind of brilliant conception, albeit one more than a bit too caught up in its calculated form to effectively indulge in the emotional undercurrents that made The Blair Witch Project one hell of a character study in addition to a representation of the moving image as point-of-view documentarianism. More apparent now is Cloverfield's humane side, less seemingly exploitative than on the big screen and more implicitly self-critical in its representations of death if only because its maker chose to document them. Spectacle-hungry viewers who want more "monster for their money" needn't apply: Cloverfield is only incidentally about a giant creature wreaking havoc. Rather, it's about Hud's own mental processes amidst such disaster, the burgeoning love between its subjects Rob (Michael Stahl-David) and Beth (Odette Yustman), and our own relationships to recording technology.

After an effectively prolonged set-up at a surprise going-away party in Manhattan, something big rocks the city and, before we know it, the night has already seen fire and brimstone. When a dozen or so spectators almost instinctively raise their cell phones to the head of the Statue of Liberty after the iconic face crashes in the street, hurled into Manhattan by God knows what, it's not only as if they're worshipping some unspoken deity, but we realize that Hud's perspective is just one of many. Unfortunately, these are the brilliant nuggets that are scattered about what is otherwise a very straightforward melodrama, not quite as impeccably acted as it would like to think it is and carrying with it a framing devise that even Frank Capra would consider schmaltzy in its obviousness. Cloverfield respectably feigns randomosity, whereas Blair Witch was actually shot off the cuff, the actors here rendering their characters as flesh-and-blood but only in the first dimension; whether it's just another day at the convenience store or the possible end of days, their deliberately casual feel remains a hair too close to that timid land of movie extras to be truly realistic. I, for one, would be using the F-bomb far more gratuitously if faced with a possible encounter with a creature that could well swallow me whole.

Throughout the film - which, for the idiots of the world (I'm sorry, but really, can we maybe walk on our own some day?), is actually a digital home movie that has been recorded on several times, hence the inconsistency of the events being shown - scenes preceding the central night of havoc pop up, but their presence smacks time and again of calculated cutesiness, a wink from the film to remind the audience of its own nifty conception. Cloverfield suffers from this compulsion to refer back to itself, forgoing a more genuinely (i.e. challenging) inconsistent texture that would have rendered its events all that more punchy as they unfold. Such as it is, the scenes in which our protagonists stop for news updates are among the most effective, and even more so for their lack of attention mongering; the frames within frames demand a reexamination of our viewing portal, both the way we gather information and how we function in the world. Morons may wonder why no third-person perspectives are offered up but Cloverfield's relative thrills - that of the unprotected, in-your-face kind - only work as well as they do because of the film's absolutely self-contained consistency. I highly doubt the crab/alien/monster at the center of the film will ever become the American equivalent to Japan's Godzilla, but I for one prefer its nature to remain shrouded in mystery, its origins extraneous to the films very much immediate events and themes and only complained about by those who latch on to trite details lest they actually invest themselves in that subconscious manner that attunes one to currents beyond the mere physical events transpiring onscreen.

As a humanistic look at the ground-level suffering intrinsic to much genre entertainment, Cloverfield is a visual thrill, but its own cookie-cutter rigidity cuts itself off from the deeper possibilities that always remain just within arms reach. The aforementioned scene of the Liberty head remains the one truly brilliant moment of chic pop imagery therein, and though later attacks by the lead monster and its legions of man-sized fleas never fail to make one feel vulnerable to the elements, the film fails to substantially anchor its events to character in a way that effectively builds on its core gimmick; Rob and Beth's relationship, for all of its apocalyptic, one-note "I love you" tragedy, is barely enough to substantiate the plot. Hud, probably unbeknownst to the filmmakers, is the real star here, his ultimate demise seeing the film's single most mind-bending shot: his lower half having been ripped off and devoured by the monster, the camera lands next do his now-deceased upper torso, the auto-focus toggling back and forth between our fallen heroes wan face, the grass beneath him, and the smokey, smouldering ruins behind him. Whatever the nature of our obsessive kino eye, it is one lost without us.

Cloverfield comes to us half-assedly packaged like a secret government file (if they wanted to maintain the illusion, why not go all the way as did the film?), its disc fake-damaged in the same way the Borat DVD looks like an obviously fake DVD-R (in other words, expect Blockbuster customers to demand a refund, mistaking it for the real thing). The image appropriately straddles the grainy/crispy look chosen for the film while the sound is nothing short of formidable, despite the obviously illogical pitfall that no home camera yet comes equipped with its own Michael Bay sound system (had Cloverfield gone so far as to emulate muffled audio as did Blair Witch, who knows how creepy those fucking fleas might have been).

In the features department, the usual slew of making-of featurettes dominates the selection (they are, thankfully, less cutesy than the packaging), although the revelation that the monster is in fact meant to be a mere baby of its species all but demands another feature made with the creature solely in mind. A handful of appropriately deleted scenes and two minutely different endings may intrigue fans, while the commentary track sees a soft-spoken Matt Reeves detailing the aesthetic and technical nature of his film so meticulously (apparently for the benefit of the numbskulls who still don't get "why the camera shakes") that you'd think he was attempting to connect the dots on Inland Empire from the ground up. If any, skip the batch of outtakes that effectively solidify the film's party crowd as the go-to douchebags of Lower Manhattan.