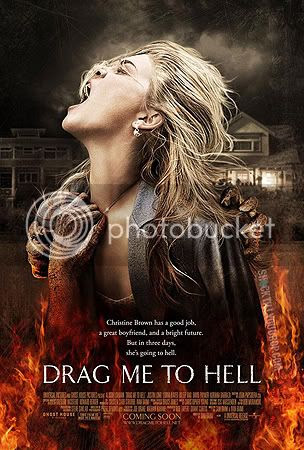 Drag Me to Hell isn’t a masterpiece, but if one considers only horror films designated PG-13 by the MPAA, it certainly stands near – if not at – the top of the pile. A throwback of sorts to director Sam Raimi’s Evil Dead trilogy (particularly during a late, altogether showstopping sequence in which the film’s villainous spirit inhabits the bodies of several living characters), the film is appropriately nasty and unrelenting, torturing its main protagonist (and, likewise, the audience) with nerve-racking setpieces as traditional in conception (the use of shadow recalls Murnau’s Nosferatu) as they are expert in execution. With the possibility of a promotion on the line (as well as the approval of her boyfriend’s elitist parents), Christine (Alison Lohman) denies an elderly woman's (Lorna Raver) request for a third mortgage extension, despite her apparent physical ailments and last-minute resort to begging. One unforgettable parking garage encounter with the psychotic senior later, she finds herself the recipient of nightmarish experiences soon revealed to be the product of a curse laid upon her by the vindictive gypsy woman. In a time where the majority of horror films attempt impossible contrivances to elicit scares, Drag Me to Hell is a refreshing reset to simple button pushing, with Raimi’s orchestration of hellfire images, gag-inducing traumas, ominous noises and malevolent forces walking a fine line between the cheeky and the cruel; whatever the film might lack in subtlety it mostly makes up for with punchy flair, and there’s a genuine sense of spiritual turmoil encoded in the tastefully CG-enhanced compositions. A pity, though, that the film’s ultimately ironic resolution is too overtly alluded to beforehand, thus diminishing its fiery wallop, or that the financial subtext of literally selling one’s soul never bubbles up in more deliciously subversive manners. Less than perfect, Drag Me to Hell nevertheless stands as the latest in a line of occasional, much-needed reminders that the horror genre – Roth, Bousman and other offenders notwithstanding – isn’t going completely downhill anytime soon.