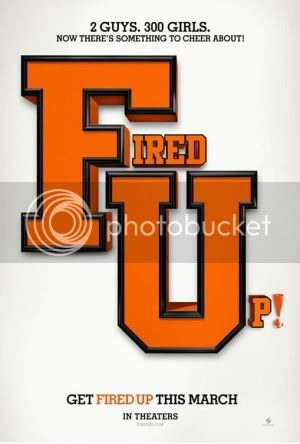 All the more so after the heartfelt, witty raunch of Sex Drive, the banality of Fired Up is unacceptable. Seemingly conceived of and crafted without the slightest trace of discernment (which is to say, the movie feels like a stretched effort so as it is), this American Pie-Animal House-Bring It On retread functions like an amalgamation of dozens of other, mostly bad movies, going through preordained motions with a zombie-like lifelessness, the dearth of originality confirmed further by the self-defeating adherence to PG-13 standards amidst implicitly R-rated material. Here, two jocks ditch football practice for cheerleading camp in hopes of scoring with the female populace; terrible sports jokes and gay riffs ensue, complete with snippets of rock anthems (“Tubthumping”, et al.) more memorable and distinctive than a single solitary frame of the film itself. Two worthwhile gags stand out from this steaming pile, and I came up with one of them. For the first, as the squad arrives at camp, having chanted “We, are driving!” for the entirety of the bus ride there, imagine the driver drawing a pistol to his head just before exiting the frame (it would be an appropriate response). For the second, stay through/fast forward to the end credits to see a dragon pratfall. Or not.