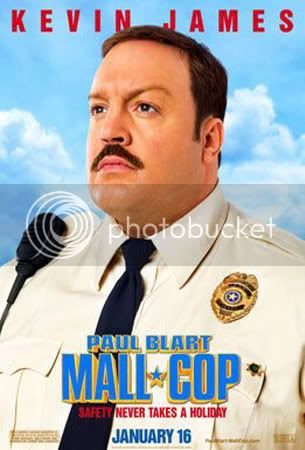 Thumbing noses at its very premise, the bulk of critics (and more than a few viewers) slammed I Now Pronounce You Chuck and Larry for the very offenses that unpretentiously progressive production sought to extinguish. (It’s no surprise that the bulk of that film’s biggest critical supporters are of the homosexual persuasion.) Following in the same vein as that gem is the similarly modest common-man comedy Paul Blart: Mall Cop, in which the titular, loveable sadsack – a single, overweight dad whose wife, having obtained citizenship through their marriage, left after giving birth to their child – finds himself in something of a Die Hard retread when thieves hold up the local shopping mall where he’s been employed as a security guard for the past decade. Though its channeling of archetypes proves less than perfectly quotidian, Paul Blart still has more to love than hate. Kevin James’ everyman deserves stronger material; rarely does the bantering dialogue proves as charming as the rapid-fire physical gags (Blart’s almost symbiotic command of his scooter has a sublime visual poignancy), which skew closer to silent film existentialism than the anti-fat stereotyping the film is regularly accused of – something that only occasionally, and misguidedly, manifested itself to these eyes. Unfortunately, whereas Chuck and Larry catapulted its premise to gonzo heights (no small thanks to Ving Rhames) and thus became something greater than the sum of its parts, Mall Cop all too quickly succumbs to genre routine, forgoing true subversion for mere surface parody. Like the opening scene, in which Blart passes out from lack of blood sugar just inches before the finish line in a career-defining fitness test, it’s only almost the making of a comedy classic.