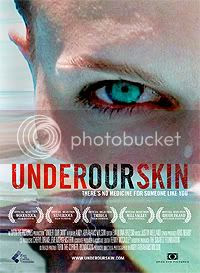 The best thing I can say about Under Our Skin is that I never for a moment doubted the sincerity of its intentions. Director Andy Abrahams Wilson comes to the material - the much-overlooked (and largely deliberately ignored) epidemic of Lyme disease - with personal experience in the matter (his sister was diagnosed). His stake shows in the film's unflinching intimacy with its subjects, which is to say, perhaps altogether too much. So unwaveringly focused is Under Our Skin on human suffering that it only intermittently rises above the worth of pure information; the film intends to elicit empathy via a series of paralleling biographies illustrating various patients' battles with the disease, but instead - perhaps expecting audience callousness - achieves overkill (the incessantly somnambulistic score alone trumps the sorrow on display with trite, arty manipulation). The effect is that of a dramatic stranglehold, inadvertently weighing down the doc's aspirations to civic change; by the time it touches on the hows and whys of Lyme's silent spread, the film (and audience) is far too drained to work up the appropriate levels of anger in response to the government and medical corruption at work. The disease - similar in symptoms to syphilis and AIDS, among others - remains largely a mystery, and the medical community remains fiercely divided over both its overall severity and the effectiveness of varying methods of treatment; numerous doctors have lost their licenses over the attempted treatment of Lyme patients (some even persist in suggesting that most incarnations of the disease don't really exist; a Simpsons clip illustrates how society has swept the danger under the rug). Suffice to say, many who stand against further research bear financial conflicts of interest (many of those representing the self-declared authority on Lyme bear ties to stricken insurance companies), having sacrificed public safety and quality of life in the name of private sector profit. Only in its investigation into these downright evil motives does Under Our Skin take on the necessary role of activist, and for the sake of those sorrowful faces (and, undoubtedly, many more to come), I wish it had gone further and deeper.

More information on Lyme disease can be found at the links provided here.