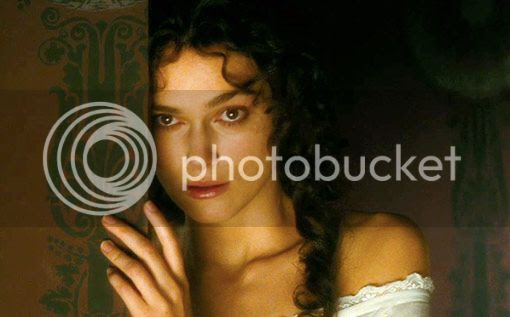 Joe Wright's obsessively stylized (some would say over-) direction hasn't been my cup of tea in the past, but his boldly staged Anna Karenina is drunk enough on art direction alone that I'm now convinced his past efforts are worthy of a reappraisal. Here, the stage and cinema meet in a merged dimension that suggests Sucker Punch by way of masterpiece theater; warts and all, I was about in love with it by the ten minute mark when a symmetrically dispersing floor of paper pushers finds itself accompanied by an out-of-nowhere handful of roving musicians. Kiera Knightley seems to have lost some of her audience appeal in recent period pieces (how else to explain her master class turn in A Dangerous Method going almost completely overlooked?), but she's as well-used here as in Wright's past works, and it's almost high praise to say she stands out amongst the sumptuous surroundings (as her scorned husband, Jude Law lends additional moral complexity to the proceedings). The oppressive social expectations of women are explicitly examined via Tolstoy's classic story, but here even more blatantly, cinematically so via the film's interpretation of life as performance on the public stage, and what the film potentially loses through the elevation of style is gained back in multitudes through reflexive autocritique and self-devouring meta-ness. The hit to miss ratio is about even, and the ending in particular feels less than thought out, but the end result remains quixotically affecting, and more than the sum of its many delirious parts. 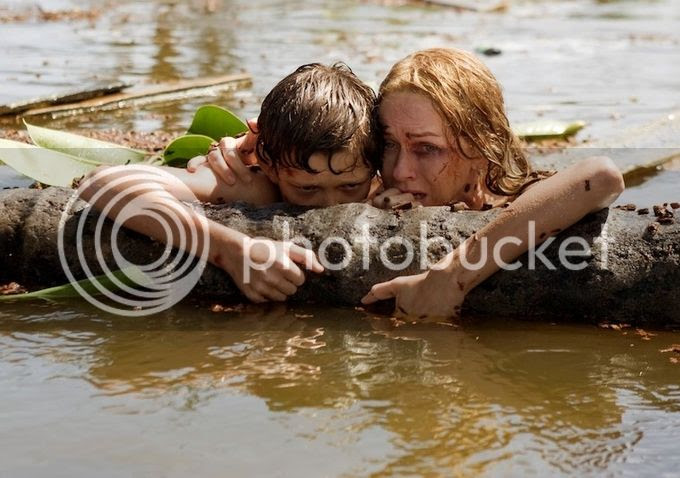 If there's anything in the way of legitimate human emotion to be found in the fraudulent The Impossible (the title is supposed to refer to the human spirit, or the statistical unlikelihood of the depicted events, but as a final reveal it suggests a party host unaware that they've just soiled themselves in front of the guests), you can chalk it up to the considerable talent of the cast, most of whom are wasted in this over-glorified horror shlock that thinks of itself as a Lifetime melodrama (I never thought I'd say this, but, if only). Spoilers ahoy, folks. The most existentially disturbing natural disaster in memory becomes a mere backdrop for a white family in peril, which is not to suggest the knee-jerk liberal political correctness I used to so frequently trip over, only that the larger scope of death and destruction is effectively whisked away by this misguided survivor's tale, which offensively implies that the preservation of a single family somehow diminishes the larger tragedy at hand, to which only lip service is offered in the form of dispassionately fleeting wide shots of mass suffering. Case in point: the film opens with darkness accompanied by the deafening rumble of a mounting wave, later an absurd point-of-view shot from the ocean itself, but the closing pan over the Thai landscape devastated by the 2004 tsunami barely registers an afterthought amidst all the life-affirming, "now it makes sense" hokum. Between these distasteful bookends is a whorish concentration of shamelessly manipulative suspense tactics (separated family members just missing each other) and pornographic levels of destruction nowhere near as terrifying as they should be. Of its many odious missteps, what reeks most about The Impossible is that it mistakes adventurous titillation for humanitarian mourning. 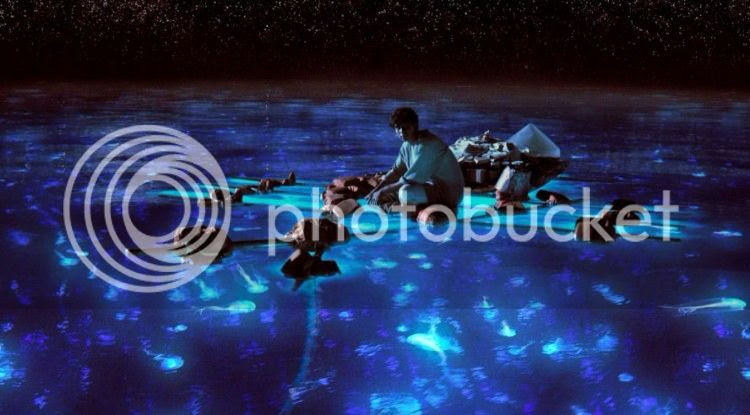 The biggest champions of Life of Pi describe a mountainous visual achievement that makes a profound statement on life, God, existence, etc., perhaps unfairly bringing to mind 2001: A Space Odyssey as a point of comparison. In short, I think Ang Lee's film, adapted from Yann Martel's "unfilmable" novel, is a remarkable achievement, but I think such hyperbolic praise does this gentle storybook of a movie a disservice, thematically and aesthetically. Stranded on a lifeboat in the Pacific Ocean after a shipwreck drowns his family en route to America, Pi (Suraj Sharma) survives his ordeal not only for nearly two-thirds of a year, but with the companionship of a Bengal tiger (amusingly named Richard Parker) who also escaped the sinking vessel. At least, that's one version of the story, which is relayed by the adult Pi (Irrfan Khan) through a flashback device that's belabored on the page but plays out as almost natural with Lee's understated flourishes. Visually, Life of Pi is pleasing, but despite its ground-up 3D visuals (or perhaps because of them), most of its compositions struck me as flat; initially disappointing, a second viewing convinced me these could satisfactorily be interpreted as the illustrations of a children's book, one that tenderly presents the young (and young at heart) with Great Ideas that, while enunciated and telegraphed, lose little of their vibrancy or wonder. Splashes of the audacity the director exhibited in Hulk could have been tripled for my taste, and there's some glorious natural imagery (a whale ascending through an jellyfish-filled ocean comes immediately to mind) that speaks for itself. I remain convinced that Martel's novel could have yielded a greater film in different hands, but Lee's work remains one to be grateful for. 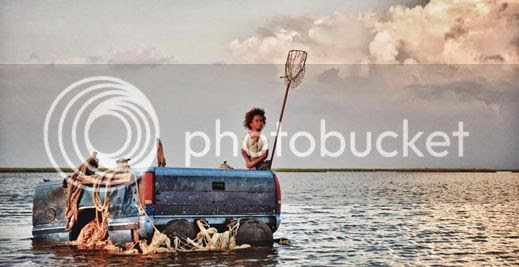 Seemingly tethered together with random scraps of litter and pulp not unlike the makeshift home of its young protagonist, Beasts of the Southern Wild yearns to find eternal truths under impossible circumstances, and succeeds with flying colors by my watch. Quvenzhané Wallis is Hushpuppy, a young girl forced to survive growing up and the elements amid the absence of her mother and infrequent presence of her alcoholic, sickly father (Dwight Henry), who refuses to leave their home - "The Bathtub," a fictional, mystical community cut off from New Orleans by the levees - even when a Katrina-like storm brings floods, disease, and the threat of starvation. Much ado has been made about the film's social and gender depictions, criticisms that strike me as missing the gist of Hushpuppy's necessarily compromised life and vantage point: her tomboy demeanor, her tolerance of her father's recklessness, her cosmic view of the natural world (frequently manifested in the form of imagined Aurochs that symbolize the beasts, internal and external, with which she must reckon), all point to the thriftiness of someone forced to find their place in the world with minimal guidance, bereft of proper civilization or technology. Benh Zeitlin's debut feature goes for broke with earthy, abstract imagery (unlike, say, Killer of Sheep, Beasts' well-worn images are deliberately so), and only fleetingly does this fantastical facade reveal itself, as the locally cast extras sometimes push their archetypes to the breaking point. Those hiccups are quickly swallowed by Beasts' profoundly affecting weirdness, the coming-of-age of a character as naïve as she is remarkable. 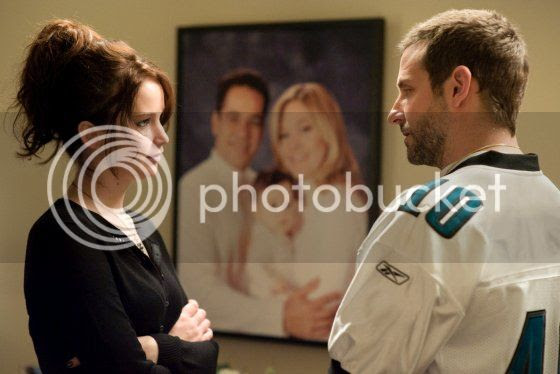 For all of its obvious storytelling shorthands and familiar narrative beats, I was smitten by the lived-in characters and relationships of David O. Russell's The Fighter, and his similarly unpretentious Silver Linings Playbook now occupies the same chamber of my moviegoing heart. Bradley Cooper and Jennifer Lawrence are Patrick and Tiffany, two young adults recovering from the devastating blows life has dealt them when they meet cute at a mutual friend's dinner party. No shortage of bellyaching has taken place over the film's purportedly demeaning portrayal of mental health disorders, yet as someone with more than their share of experience with depression, ADHD, OCD and PTSD (shall I continue?), such struck me as tastefully rendered within the confines of the film's chosen rom-com genre trappings, their portrayal lent genuine heft by Lawrence and Cooper's elastic sensibilities and smouldering chemistry. It also helps, I suppose, that I've learned to laugh at myself when it comes to some of my own emotional shortcomings, and perhaps even (despite being no fan of the team) being raised in the same region where the film takes place, where the Philadelphia Eagles are less of a sports team and more of a hallowed religion. Russell's work isn't exactly visually progressive (lots of visual snatches and impromptu cuts that seem more impulsive than lazy, which, despite my personal recommendation here, makes one wonder about the taste of those who deemed his work here Oscar-worthy), but Silver Lining succeeds less on the merits of aesthetics than its willingness to give in to crowd-pleasing effervescence. I wouldn't seal it in a time capsule for future civilizations like I would The Turin Horse, but I'll take it anyway.