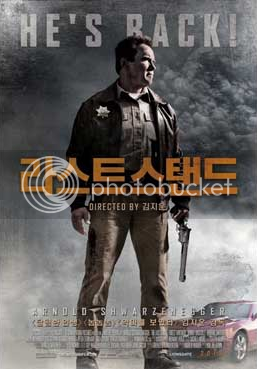 With apologies to the frequently hilarious but flawed True Lies, The Last Stand might be the best genuine (as opposed to accidental) action/comedy Arnold Schwarzenegger has ever starred in, and rest assured that this excellent B-movie's quick disappearance from multiplexes stands as an indication of both the cultural taste at large as well as what I'd describe as an acute rejection of implicit criticism of American society and values (one that could easily become anti-Americanism if viewed through the warped lens of seemingly every successful conservative talking head), even though it - like the lovingly scabrous view of life on The Simpsons - ultimately embraces it in the end. "You make us immigrants look bad," quips Ahnuld, astonishingly sans irony (it was a stroke of brilliance to cast Johnny Knoxville, who allows the visibly aging star to work as both straight man and not a cybernetic infiltrator), casting into stark relief so many of the disingenuous (or simply stupid) arguments surrounding the national discussion (if we can even call it that much) on gun violence, immigration, crime, and our larger values. With a slow-burning swiftness that's worthy of Carpenter, The Last Stand moves its pieces into place, owning its genre trappings with a zeal that borders on genius (the telephone pole gag might be tops) and never commenting on the aforementioned issues so much as implicitly illuminating them. A drug kingpin (Eduardo Noriega, doing better since Vantage Point) is fleeing the feds (Forest Whitaker, not so convincing as an asshole), his minions (led by Peter Stormare, who also stars in that thing that's eating up the box office as I write this) building a makeshift bridge to Mexico just outside the town of Sommerton Junction, where retired narcotics officer Ray Owen (Schwarzenegger) is playing sheriff. Arnold's a strange guy, and I feel alternately bad for and angry at him for the mistakes he's made, but I'm forever indebted to him for his contributions to the screen (well, some of them; I haven't seen Junior, for instance), something that surely informs the joy I experience seeing him here. The cast entire is impeccable, occasionally taking things to the meta (I'd probably love this movie if only for the sight of Luis Guzman charging down a street with a drum clip-enabled automatic blazing), and if the sequences removed from Sommerton held a little more presence than their merely expositional duties require, I'd be less hesitant to call The Last Stand anything less than great.