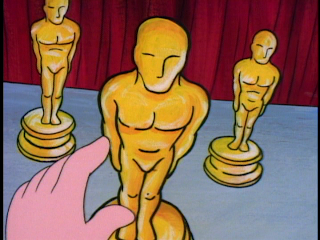 Can you tell how excited I am? Actually, elated as I feel almost completely ignoring the awards season madness for the past few years compared to the exhaustive attempts at coverage I used to waste my time on (even more invigorating, however, was the day I stopped frequenting IMDb message boards), the truth is that there still is and probably always will be a small part of me that invests in these things: the race, the tension, the agony, the ecstasy. It's a great feeling when a film you love is up for an Oscar, but on the flipside, it's that much more difficult to ignore the other 50-75% of the time when you've allow such fleeting pleasures to creep in. Then there's the unfortunate fact that Oscars and their like play a serious, if perhaps diminishing, role in the landscape of determining what we watch, and need acknowledgement if only out of caution or paranoia.

With no further delay, here are my nomination predictions.

*UPDATE: I made a serious effort to avoid everything in the way of published Oscar commentary prior to formulating my own predictions, and didn't want to alter this choice without at least acknowledging and explaining my reasons for doing so, even if it's only a few dozen who might've possibly noticed the inconsistency. I could go into detail about how The Intouchables, my replacement choice (a film I'd happily forgotten for some time), and The Impossible  (which I only saw for the first time yesterday) share certain overlapping qualities (eerily paralleled by their similar titles) frequently adored by miserable white men in Hollywood, but you probably get the idea already.

UPDATE, Post-nominations: Depending on how you guage the sliding scale Best Picture field, my guesses were about 70% accurate. Not bad for a year with a nice batch of surprises.

Email ThisBlogThis!Share to TwitterShare to FacebookShare to Pinterest
Labels: awards