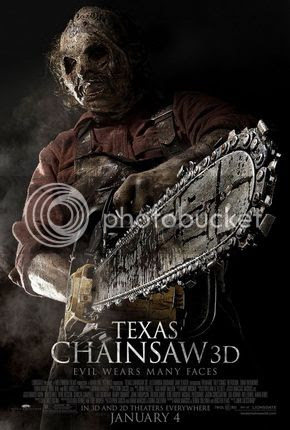 The Cabin in the Woods looks exponentially more rotten in hindsight, but it's still preferable to the bottom-of-the-barrel shlock it purports to deconstruct. Case in point: in 1974, Tobe Hooper tackled the unrest of a generation while elevating the horror genre in his masterpiece The Texas Chainsaw Massacre. It's hard to imagine a sharper fall from grace than Texas Chainsaw, a cartoonish 3D-equipped sequel/ripoff so infantile in characterization and cavernous in subtext that, along with its corny abbreviated title, instills a palpable fear that we're collectively regressing to the point of realizing the Oscar-winning film Ass as envisioned in Mike Judge's satire Idiocracy. John Luessenhop's film picks up shortly after the cliffhanger conclusion to the original, when a local mob torches the Sawyer household for harboring the murderous Jedidiah "Leatherface." Cut to present day, when the lone known survivor of that riot (Edith, adopted as Heather, skillfully phoned in by Alexandra Daddario) learns of her alternate family history and an inheritance that awaits her in Texas. After a reel's worth of mandatory exposition not worthy of a screensaver, it's time for the chopping block: it's unclear whether it's been the roughly twenty years Heather's apparently aged since she survived her family's murder or the nearly forty years since Hooper's landmark film (if only a continuity of events were the worst offense herein), but either way, Jed's been living in the basement of the Sawyer mansion all these years, waiting for fresh meat. Heather's friends and eye candy boyfriend serve nicely, but a brush with the local redneck cliches is all it takes for her to warm up to the maniac who diced her friends and tried the same with her, because, you know, he's family. Fourth-wall breaking visual gags and pornographic levels of meaningless violence abound as Texas Chainsaw reaches its offensively tacky, ideologically confused climax, and you'd be forgiven for expecting to see the long-separated cousins in a warm embrace before the credits roll. Perhaps the first-ever R rated film made for children; pardon me while I reassess my stance on the death penalty. If 2013 has a worse horror film to offer, I don't want to see it.