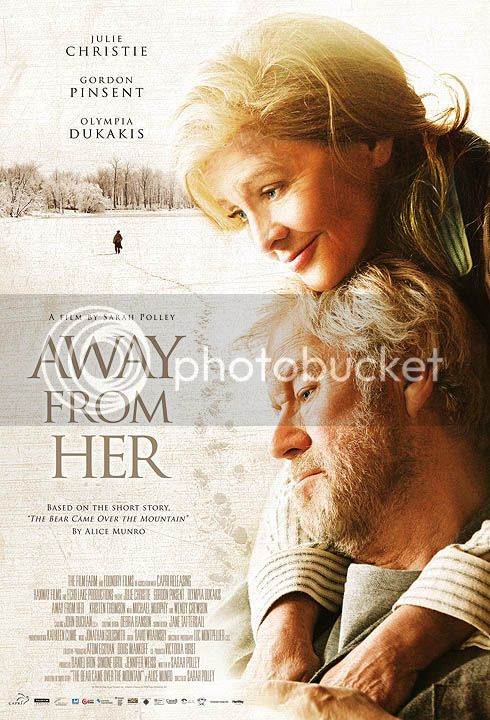 The pangs induced by the onset of Alzheimer's disease - for both the victim as well as their onlooking loved ones - make up the basis of Away From Her's central dramatic foundation, and it is one that actress-turned-director Sarah Polley examines with an assured poise and formal - yet feeling - emotional insight. After nearly fifty years of marriage, Grant (Gordon Pinsent) and Fiona (Julie Christie) find themselves at a point where their living arrangements will no longer prove sufficient in caring for her incurable and increasingly controlling disorder, and while her moving to a nearby facility for the mentally impaired is indeed the best medical decision to be made, the policy that prevents new patients from receiving visitors for the first month of their stay proves to be a nearly unsurpassable obstacle in their already strained relationship. Polley communicates her character's emotional rigors with a cool and controlled visual palate, light on indicative musical scoring or overt explanations of emotional undercurrents but heavy on a deliberate "prettiness," a style that initially activated this critic's gag reflex but ultimately revealed itself as a newfound means of ferreting out the textures of human experience present within the narrative; in this way, Away From Her is something of an antithesis to the fake fuzziness of any Hallmark movie of the week. The film stays largely with Grant and his trials following Fiona's worsening condition, and it is from this angle that the film becomes less explicitly about Alzheimer's than about any scenario in which the definition of love is put to the ultimate test; Grant's past is smeared by act(s) of infidelity but his commitment to his wife during this most testing of experiences proves to be his having channeled that regret into something wholly productive (in what may be the film's most telling sequence, Grant finds himself in the most unlikely of interactions, one that crosses gaps of age, gender and culture in a sublime moment of holiness). Polley knows this material well, and though her sincerity is occasionally peppered with an attitude of superiority, the former greatly outweighs the latter. In the end, though, it is the cast who proves to be the most affecting; Gordon Pinsent is wounded in all the right ways by this most selfish of diseases, but it is Julie Christie who is most revelatory - her performance is practically invisible amidst the fabric of the film. Together, they illustrate the soul inherent in life's trials and the triumph that can be salvaged from even the most seemingly absolute desolation.