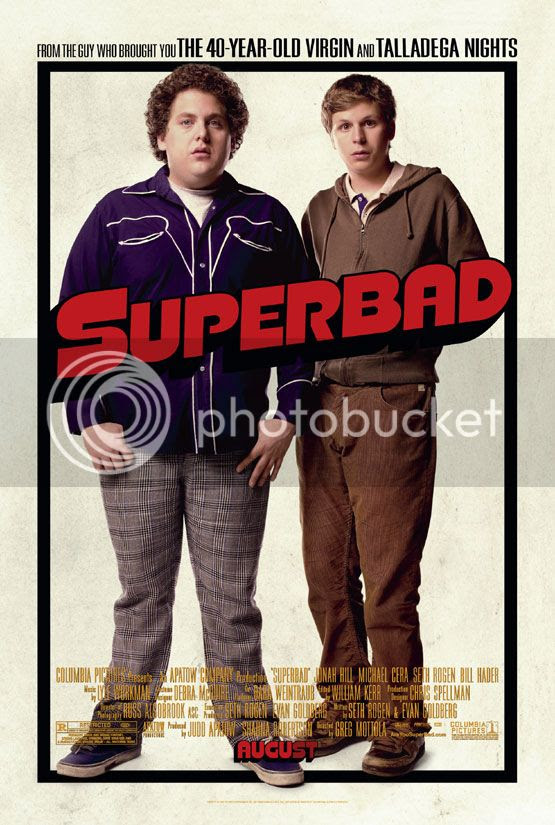 Forget American Pie - Superbad is the modern teen sex comedy. The film reverses the escapist fantasy of the drunk teen comedy, taking its character's idiosyncrasies and defects head-on as a means of uncovering the humanity within, as opposed to burying it beneath loads of uncomfortable innuendo and shallow bumblefuckery. The plot is threadbare and all the better for it; longtime friends Seth (Jonah Hill) and Evan (Michael Cera) attempt to go all out during what is to be one of their last nights of high school partying together, loading up on alcohol and attempting to lose their virginity in their pursuit of personal worth and acceptance in a ruthless social environment. Hints of misogyny and selfishness abound in their efforts towards sexual gratification, but Superbad is a film that understands the vain struggle of the outsider high school lifestyle and the excessive focus laid upon otherwise superficial concerns; it knows that such male-centric behavior can be absolutely hilarious from an outsider's perspective (no more so here than in a montage of personified dick drawings, culminating in a brilliant Dr. Strangelove parody: a sketch of a Major Kong penis riding what was already cinema's greatest phallic symbol), but it also has the insight to know that these things are funny because they represent the way we were rather than the way we ought to be. Whereas its genre predecessors cheer with the guy who scores and mock the guy who goes home alone at night, Superbad has the audacity to look for the deeper feelings expressing themselves through these sexual frivolities, male and female alike. Seth, Evan, and their dweebish underling Fogell (played by Christopher Mintz-Plasse, later dubbed "McLovin" thanks to the so-stupid-it's-brilliant running gag of his poorly envisioned fake ID) ultimately get more than they bargained for during their would-be escapist escapades, and with their misadventures charmingly bookended by (and occasionally crossing paths with) those of Slater (Seth Rogen) and Michaels (Bill Hader) - two juvenile cops in a perpetual state of arrested development - such going-ons come to represent an eternal act of learning. Seth Rogen and Evan Goldberg's screenplay - first drafted when the pair was but fourteen years old - tears down the clichés of the genre and in doing so resurrects one all but dead at the hands of a decade's worth of Old School-like comedies, and its keen sense of self-criticism makes it the superbaddest one of all.