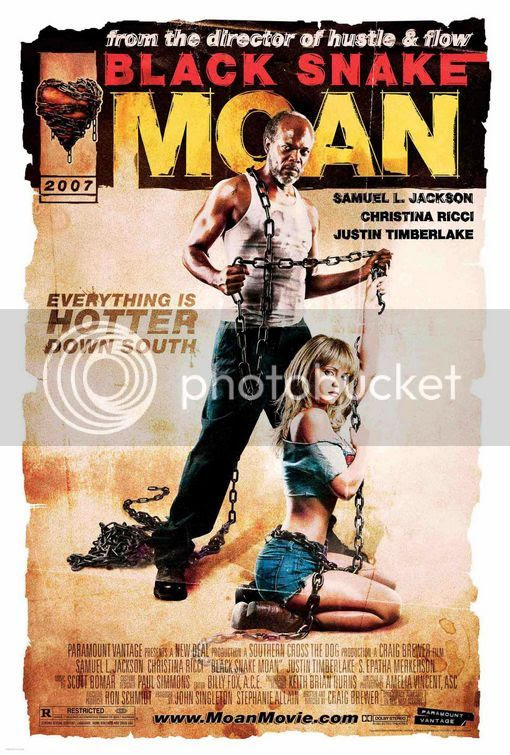 Religion hangs over the lives of the souls in Black Snake Moan - not so much as a specific theology, but as a guiding force of truth in the name of which one can righteously seek to better themselves. This is the primary manner in which the film exemplifies the morality central to its story and themes, a necessary component in justifying its dealing with so many seemingly immoral subjects and events. A true exploitation film - albeit one with a passionately pumping heart - it is a pristine example of masterful storytelling infused with technical know-how and assured ethos. Make no mistake, Black Snake Moan doesn't "make up" for its being soaked to the gills with sex and blood; these are components as necessary to it as hymns to a church (and, incidentally, itself). Director Brewer's previous and much lauded (though unseen by me) Hustle & Flow used its hard-out-here-for-a-pimp storyline as a launching pad for rags-to-riches turmoil. Black Snake Moan swaps the rappers culture for that of the home fried blues, the film sharing with its soundtrack of choice a deep desire to exorcise the sin in its heart so as to find the rays of salvation. There are no acts of divine intervention in the film, but there is a God most definitely present in its framework.

This knitty-gritty exploitation drama doesn't front. Its sleazy, scuzzy nature comes not from a forward desire to push the standards of taste but a been-there sense of the ways of the world. Rae (Christina Ricci) is a formerly abused nymphomaniac in remission after her boyfriend Ronnie (a strong Justin Timberlake) leaves for deploy to Iraq. Meanwhile, the older Lazarus (Samuel L. Jackson) has just learned of his wife's affair with his own brother, embittered and alone. She seeks to drown her sorrows in drugs and sex (Lazarus, amusingly, destroys his wife's rose garden with a tractor), ultimately ending up beaten and raped on the side of a road, left for dead, only to be discovered by Lazarus in the morning. Nursing Rae back to health, he learns of her reputation and uncontrollable urges, and takes it upon himself to better her situation even in the face of local attitudes and racial taboos. Like the film itself, they defy convention in working towards some form of betterment, their flaws not justified but accepted as inherent to their beings. Black Snake Moan knows the troublesome baggage many are forced to carry and it loves them all the more for it.

Here, the sex is hot but it's anchored down by a genuine sense of humanity laced with spirituality, with Brewer astonishingly evoking his character's physical and emotional plights via a controlled color palate, subjective sound design and delirious suggestive visual framing. Rae aims to fill some internal void via her constant rutting while Lazarus' picking of his guitar is unto itself an act of soulful lust, the two ultimately taking on an unlikely father/daughter relationship not unlike the central device of Million Dollar Baby. Black Snake Moan is mournful but vibrant, hopeful and yet reserved; Brewer gives his characters (and the audience) the satisfaction of having made some semblance out of life's trials but not without the reminder that additional bumps in the road lie ahead. Barefoot and half-naked for most of the film, Ricci is a revelation, shining not only through her impressive physique but in using it as an expressive devise (evoking her character's uncontrollable impulses via a fearless series of convulsions and moanings) - we forget how much skin she's showing in light of how strongly Rae's tormented soul shines through. Such is the nature of Brewer's film altogether. From the joyous to the desolate, it is a work that knows how to roll with life's punches.