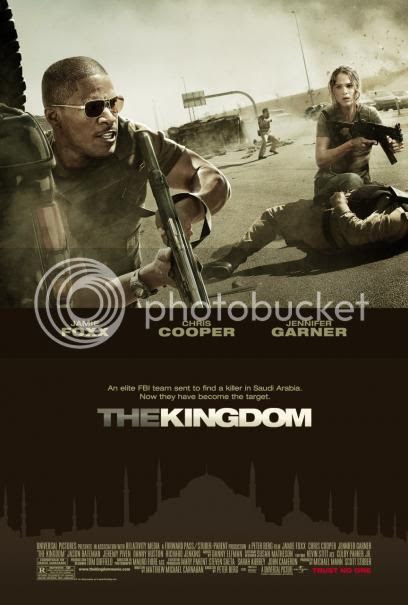 A single image from The Kingdom’s opening credits effectively summarizes the entire film to follow. An animated timeline serves to enlighten the audience as regards the history of Saudi Arabia, from its formation as a country to the discovery of oil to the involvement of fifteen of its citizens as hijackers in the 9/11 terrorist attacks. This final point is illustrated – in cheap thriller effect with pulse-pounding musical accompaniment to boot – with the all-black image of a jet en route to its soon-to-be-collapsed targets, the screen cutting to black just before the moment of truth, because, well, that would be going too far. There isn’t intended malice in this image, just insensitivity. In other words, The Kingdom isn’t evil – it’s just fucking stupid.

Director Peter Berg manifests ideas in his images, but here neither the thought nor the product has been well developed. The Kingdom loves America and its troops. It hates cowards who kill innocent people in the name of an invisible man in the sky. It hates when political games get in the way of progress. Such broad qualities serve as reductive labels for attitudes and beliefs in our current political climate (you know, where conservatives hate queers and love Jesus while atheist liberals take it up the ass amidst their feverish anti-American ramblings), and this film does little to nothing to reinforce the notion that reality isn't all black and white. The Kingdom will likely divide critics and audiences as regards its own purported ideas and values (a minor banter has already broken out at The House), but most of these quarrels – like any interview in which Bill O’Reilly is present – are likely to miss the bigger picture amidst their knee-jerk defensiveness. What is the bigger picture, exactly? Whatever it is, I’m sure that a stupid action flick posing as moral pontification on terrorism ain’t what we’re looking for.

The Kingdom starts off with a wrenching terrorist attack, though it becomes clear we’re being played for fools when it questionably avoids anything particularly gruesome amidst the chaos in typical shock-horror fashion. For all of its moral shortcomings, at least United 93 didn’t shelter us from the graphic nature of its subject matter, a necessary quality to weather if we're to truly come to understand the nature of war. Here, the bullets fly and the bombers explode, but the riddled bodies of children remain deliberately off screen, titillating us with their demise but forgoing us the trouble of dealing with it up close and personal. In this way, The Kingdom is everything is shouldn't be: safe and distant. Among the deceased was a comrade of four highly trained FBI agents, who – despite the fact that additional U.S. troops on Saudi soil may very well provoke more violence – opt to enter into the country in hopes of finding the necessary evidence to track down the perpetrators and bring them to justice. Here, The Kingdom similarly sidesteps the ideological violence at hand. Sure, American presence abroad might foster more terrorists, but we don’t say Uncle. You're either with us or against us.

Whether in the flesh or on the screen, the battlefields of these culturally driven conflicts require not just guns, but ideas, and The Kingdom, like Dubya, seems to think that enough grenades and ass-kicking attitude will suffice just fine. The film’s slight complications on such boot-in-your-ass themes, then, come across as empty posturing. Though it takes the time to show us some Saudi who aren’t terrorists with bloodshot eyes, it never ingrains these facets into its core narrative, where the innocent hundreds who’ve died from the latest car bomb are of half the interest as those of U.S. blood who perished. Its humanism is genuine but its execution smacks of idiocy, like a drunkard unaware of his own obnoxiousness.

These problems translate consistently to the film’s surface indulgences, where Jamie Foxx and company get down and dirty in the The Kingdom to put a smackdown on the evildoers. Their mission stems from a basic, and legitimate, longing for justice, but it lacks depth when placed against the background of a much wider and complex maze of motivations and events. The Kingdom defines its characters not as individual human beings but as Americans (or not), ultimately lacking for any emotional resonance, turning a small chapter of the War on Terror into the week’s latest shoot em ‘up – albeit with the occasionally serious nod so as to remain “legitimate.” Its shakicam style feigns realism but the camera’s presence longs to be felt amidst the visceral proceedings, rendering the action sequences immediate but fleeting, while the divide between east and west remains unexamined despite lying at the center of the film’s plot. The final scene attempts to draw out a sense of moral similarity between Us and Them, but it falls short as a dialogue because it refuses to give a genuine voice to anything potentially labeled as an opposing force. As a political thriller, then, The Kingdom fails most in its only being able to empathize with itself.