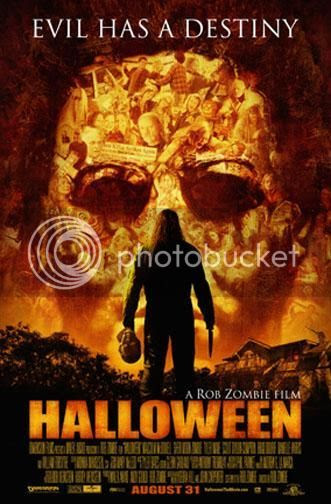 Remakes, as a whole, have never gotten my goat. To this viewer, cinema is less about individual stories than about our individual modes of sharing them, and so it is often the case that a number of voices will each have their own interpretations to contribute to a specific tale, all of them worthy of equal consideration and regard (to allow those instances where the film in question is made purely for money to speak for the whole is nothing short of foolhardy, and yet this is the trend amongst both the critical and public movie going bodies). Few films, if any, can qualify for the title of "definitive", though our gut reaction as fans of certain titles might be to assign that very label. Therefore, as a matter of principle - and as a declared, unwavering fan of John Carpenter's original 1978 masterpiece - this new version of Halloween has as much a right to exist as any other, original or remake.

That being said, the film just isn't very good. Instead of a taut, minimalist thriller in which tension builds most during periods of silence an only slivers are known regarding the main villain, this new film spends considerable time developing the young Michael Myers before sending him off to oversee the slaughterhouse, his killing streaks motivated by an abusive home environment and the endless taunts of school bullies. The question, then, isn't whether or not the film improves upon or even lives up to the original - a near impossibility, in this case - but whether or not it stands up unto itself. Unlike the brilliant genre deconstructions of The Devil's Rejects, this Halloween only intermittently taps into the sleaze that defines its brand of grindhouse terror, making for an uneven and unsatisfying experience, despite its scattered moments of potency. When Halloween scores, its ferocity is formidable, but too often does its overzealousness upset the scenery. The opening white trash scenes are downright hilarious but fail to convince of their emotional brutality on an organic level; the blunt naturalism of the 1978 performances has been replaced by an excess of gimmicky acting, as if to compliment Zombie's louder-is-scarier dynamics, which come so hard and fast that they barely have time to simmer into the mind. From its matter-of-fact opening titles, the film is as aggressive as they come in the genre. Here, though, it would appear as if it were attempting to compensate for something.

Zombie must be given props for his extensive reinvention of the original film, a daring but necessary act given the breadth of its influence. Nonetheless, in attempting to distance his own creation from Carpenter's, he's left it without a identifiable voice of its own, defined less by its own qualities than those it lacks in relation to its predecessor. Zombie's respect for the story is considerable, but his decision to humanize Myers is ultimately a counterproductive one; we're watching less of an evil psychopath than an enraged hunk (imagine the Geico caveman crossed with The Terminator) whose motivations feel incomplete and, ultimately (spoilers ahead) - given a late act of mercy - slightly unbelievable. Halloween 2007 externalizes all that was internal in the original, in effect forgetting that the scariest of evils are those we can't see in the flesh. Despite its better efforts, this film fails in inflicting fear onto the soul.