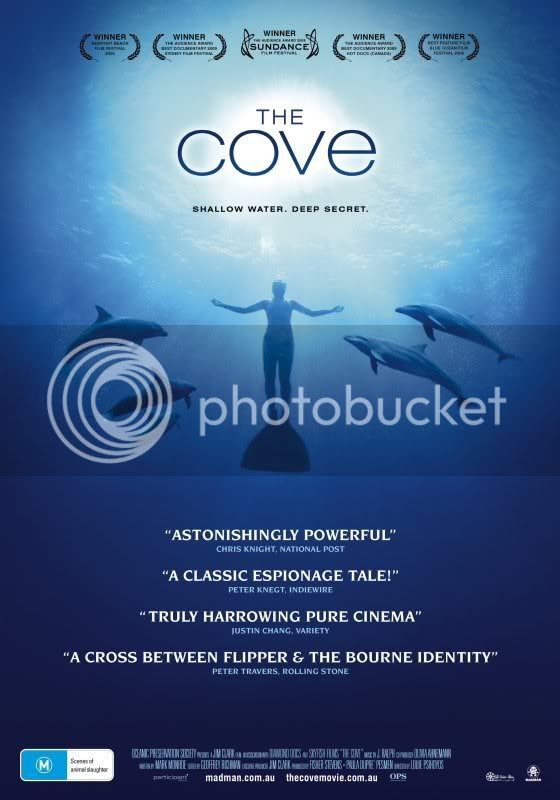 "Never rely on governments to do anything... the entirety of social progress can be traced back to the passion of the individual." So goes the (highly paraphrased) central line in The Cove, a revelatory documentary that stands as one of the finest acts of activism via cinema yet achieved. Louie Psihoyos' film follows the unrelentingly persistent Richard O'Barry in his quest to end the dolphin captivity trade, one he feels personally responsible for bringing about in the first place (however inadvertently so), having been the trainer for the dolphins used in the popular 60s sitcom Flipper. Said mission takes on ecstatic, Ocean's Eleven-like rigor as a team of similarly dedicated individuals pool their collective resources and skills to expose the central conspiracy that continues to see some 23,000 dolphins and porpoises captured and killed annually in Taiji, Japan, one of several small towns in which the barbaric harvesting process continues thanks to a government-aided media blackout. The title refers to a natural fortress near the bayside into which the animals are herded for the slaughter (always just out of public view; note, early in the film, the reddish glow that can be glimpsed emanating from the water), the healthier specimens having already been selected and purchased for aquariums round the world, often going for $150,000 apiece. Japanese spokespersons, astonishingly full of shit, assure the public that the animals die quickly, painlessly, while the toxic meat (tainted by astronomical pollution levels) is donated to public schools for mandatory consumption in a propagandistic attempt to bring about an end to the official ban on whaling, one the International Whaling Commission has proven altogether useless in remedying a la the Japanese government's bribing of third world nations to join the organization so as to vote for its reinstitution. Culminating in a blood-soaked, heart-wrenching sequence of invaluable slaughter footage as vital as it is painful to watch, The Cove is as much a call to arms against capitalism at the expense of our natural world as it is a confirmation of human dignity in the face of the unspeakable. Text "dolphin" to 44144. Now.