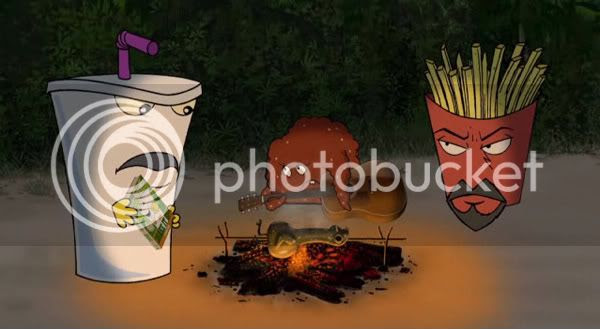 The last time we saw the Aqua Teens, Master Shake & Co. were revealed as the on-page scribblings of a real-life, flesh-and-blood, and totally pathetic wannabe screenwriter "Don" Shake (comedian and show regular H. Jon Benjamin). Suggesting a single panel in what might otherwise be a Lynchian hall of mirrors, this clichéd-in-theory expansion into live action wasn't so momentous as it was just another way of fucking with viewers' heads. In this ever-weirder "real" reality, Don is the nonpaying tenant of a yellow-hat, red-jacket-sporting Frylock (T-Pain), who threatens to kick him out on a regular basis, rubbing it in his face that his writing sucks, and he sucks; Meatwad appears in spirit only, in the form of a temptation-laden exercise ball (no further comment).