For the Love of Film (aka Down to the Wire) 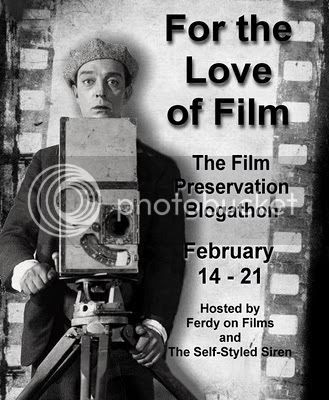 But an inch short of the deadline (as usual), I finally present my contribution to the Film Preservation Blogathon, hosted by The Self-Styled Siren and Ferdy on Films. Ideally, I'd have offered up something substantial of my own for something like this (click through the picture above for some amazing pieces), but that's just not in the cards right now (my time is eaten for many a reason: a surprise lurks, and three new reviews, very shortly). So I instead offer something from my personal movie experiences, which are deeply rooted in classic horror and thus are long familiar with the legendary, once "lost" adaptation of Frankenstein by none other than Thomas Alva Edison. Everyone should see it, and if this post sees even one more person out there discover it and treasure it, I'll be happy.

Without looking it up (I'm relishing the past, not researching a topic, people), memory says the film was found sometime in 1996 (this is, at least, when I learned of it; the glorious, early days of the internet, srsly), though it took many years for that footage to actually make its way to the public (a web site associated with the finding promised video copies available for sale in the near future; I kept an eye on it for years, but nothing ever materialized). What we have thanks to that find is a fascinating relic, a must-watch chapter in cinematic and technological history, and, I would argue, as important a special effects watermark as anything accomplished by a certain Jim C. Now pardon me while I clean up the pool of saliva collecting at my feet, and try to expunge the thought of a new version of Metropolis available in the near future...


CLICK HERE TO DONATE TO THE NATIONAL FILM PRESERVATION FOUNDATION