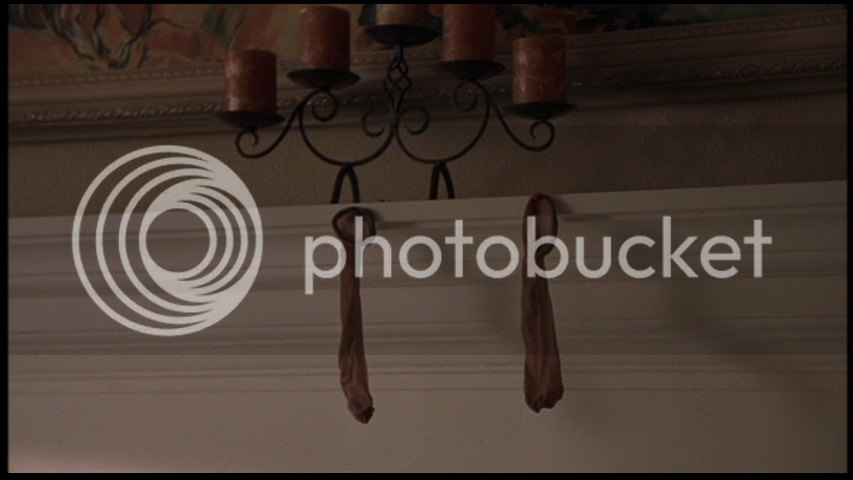 Time has the power to add poignancy to all things, so while I'd probably argue Bad Santa as a modern comedy classic despite the fact that two if its stars are now dead only these six and a half years later, it's silly to pretend that that shadow doesn't alter the perception: more recently, Bernie Mac was taken before his time (we like to think), and I barely knew John Ritter. The Dark Knight's Heath Ledger is the best recent example of this, of course, but larger-than-life bravura does not usurp quiet dignitaries-- it merely eclipses them in the eyes of fools. Bad Santa is a movie about the importance of details, of little things, of life and happiness found in the out-of-the-way places, and on a level field, Ritter's posthumous turn is as profound as Ledger's fire-and-brimstone-from-the-grave (the more recently departed Mac was, as always, alive, paling all around him).

Fantastic performances aside - and I haven't even touched on the title character yet - Bad Santa is really about two things: the audacity of the movie to think it could exist in the first place, and that required to actually bear it into creation. The holiday spirit antithesis did and still does offend like so much shock value (I said it then and I say it now: the movie is rated R, why did you take your children?), but what elevates Terry Zwigoff's comedy, based on a story by the Brothers Coen, is its lack of posturing. These people - Willie Stokes (Billy Bob Thornton in his finest hour), an alcoholic thief impersonating a mall Santa; "The Kid" (Brett Kelly; his name is one of the film's best jokes), an overweight and virtually unsupervised child; Sue (Lauren Graham of Gilmore Girls), a bartender and Santa fetishist - are fucked up indeed, but all the funnier (and more tragic, as goes the film's dual planes of existence) for their respected humanity. Willie heaves kneejerk insults at The Kid for curiosity and prowess at chess, but what remains unspoken is how observant and intelligent he is between the lines of obscenity (The Kid, not Willie).

Not unlike the Coen Brothers's own directorial output this past decade, Bad Santa works in large part conceptualization, part exacting execution, and all (A Serious Man, No Country for Old Men, etc.) take deliberate joy in jerking their audiences around, both in craft and emotionally-piercing lyricism. Bad Santa is high low art. As Willie, Thornton is a tour-de-force of his own: a crotchety curmudgeon with a heart worth loving if you get to know him past the vile surface, one that is, indeed, very thick. Pissing freely in his Santa suit and telling a dozen kids to fuck off would not be an unusual afternoon, and the never-better Billy Bob captures it like existential lightning in a bottle. People don't simply speak in this movie: they spar, and like an orchestral comedic throwdown, Bad Santa is drunk on beautiful obscenities. The very pacing seems largely predicated on the verbal music of an embittered black small person heaving vocal bricks at Willie ad nausea, alone (Tony Cox as Marcus, Willie's long time elf cohort; what recent movie has offered this many great comedy teams?). It's also an unprecedentedly uplifting experience, borderline Shakespearean in its purity, entering deliberate (but earned) It's a Wonderful Life territory with a mirror to that classic's bridge jumping scene. Then again, George Bailey never kicked Mr. Potter in the nuts. Bad Santa inspires fits of laughter and tears, but you could file it next to that film with a straight face.